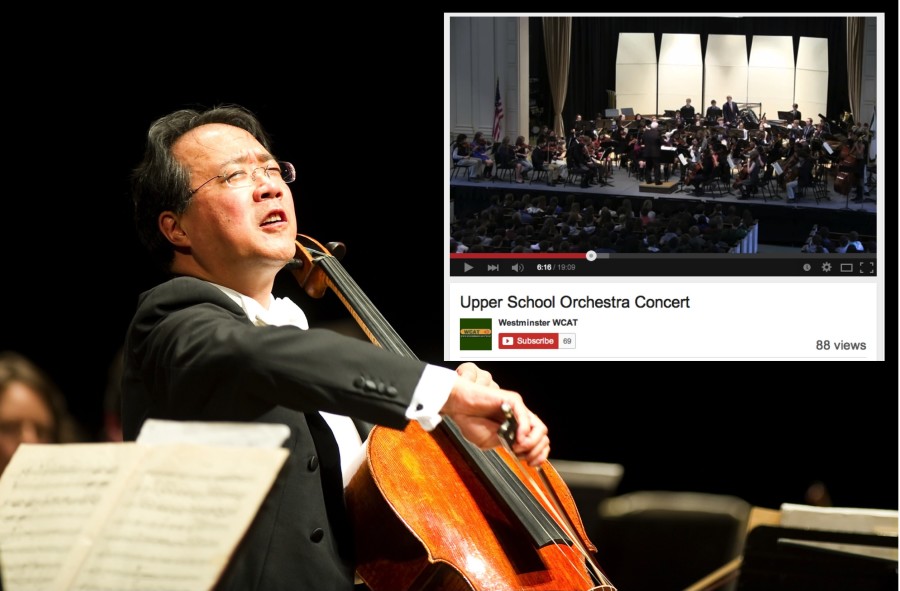 After a masterful performance at the much-anticipated orchestra concert on Tuesday night, sophomore cellist Wolfgang von Stein received an yet life-changing call from an unexpected celebrity.

“I had just taken my final bow after nailing a sweet cello solo when my mom called me off the stage in total excitement,” said von Stein. “I couldn’t believe my ears when I heard Yo-Yo Ma, my idol, on the other end of the phone! He wanted me to become his next cello prodigy, and I immediately said yes. But, I was utterly confused as to how he even knew who I was.”

The answer was found, as it always seems to be, in WCAT.

“As part of our initiative to film literally anything and everything that ever goes on at Westminster, ever,” said WCAT student leader/dictator Andrew Shackelford, “we’ve decided to start live streaming every single performing arts event, ranging from lower school chorus rehearsals to upper school FMF sing-alongs. According to our viewer statistics, Yo-Yo Ma is just one of the millions who have been watching each and every broadcast. Who knew WCAT would be so popular? I did.”

After confronting Ma about the incident, he immediately confirmed the rumors.

“I follow WCAT religiously,” said Ma. “When I’m not practicing cello or performing in front of thousands of people, I’m online watching the live streams because they simply are unparalleled in quality and content. After pouring through days upon days of “orch-cat” footage, I finally stumbled upon Wolfgang’s brilliant performance, and I knew he was to be a star. I immediately called him up to ask him to be my next pupil, and I owe it all to WCAT.”

Though Ma’s WCAT addiction spurred the unearthing of the diamond in the rough that is von Stein, the efforts of the WCAT production team played a major role as well.

“I guess all those long nights spent filming and editing the endless orchestra hype videos finally paid off,” said Shackelford. “It took me a while to choose some fitting background music, but I think Remember the Name by Fort Minor really managed to set the tone. Also a big thanks goes out to Bill McGahan for helping commentate at every concert. We really couldn’t have done it without his enthusiastic cheering and screeching that followed every song.”

Exemplified by this classic, heartwarming example of “amateur boy cellist gets discovered by world famous musician thanks to live WCAT recording,” the organization has proven to be an integral component of Westminster’s identity.

“I don’t really know much, if anything, about the technology stuff behind WCAT,” said the club’s faculty advisor Daniel Searl. “But, I do know that WCAT basically runs the school, and that’s something I take great pride in.”