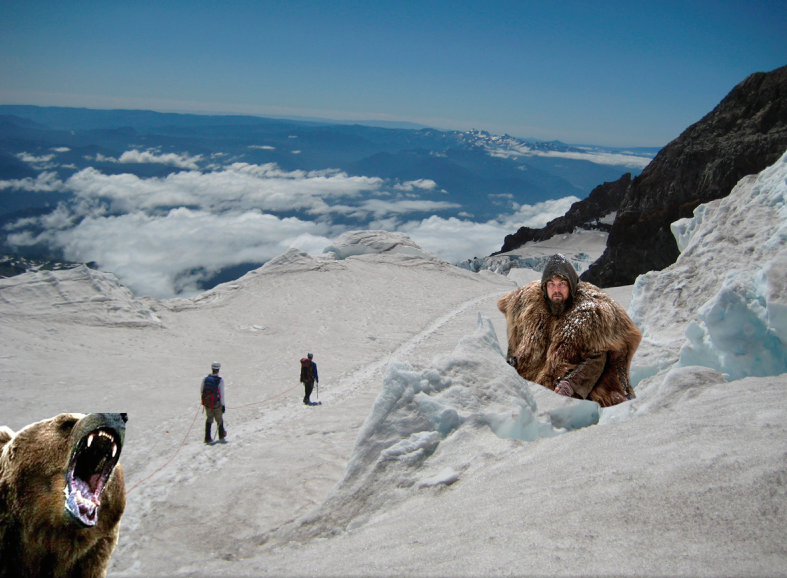 Over winter break this past year, senior Johnny Jacobson got lost in the freezing mountainside of Mt. Rainier in an effort to have a really original college essay.

“I  really wanted to get into the college of my dreams but my college counselor told me it just wasn’t likely to happen,” explained Johnny. “So I decided to take matters into my own hands.”

Although Johnny’s original plan didn’t involve getting lost in the mountainside, he travelled alone during peak snowstorm season without the proper equipment or training.

“It’s not that I told him to get lost in a snowy mountainside,” defended Jacobson’s college counselor Anthea Economy. “I just explained to him that with his average grades and infrequent extracurriculars, an outstanding essay could really help him out. I want to repeat that I did not tell him to go climb a mountain.”

Jacobson’s daring journey lasted three weeks, including all of his winter break and a portion of his JanTerm. Though he was gone for far longer than intended, his parents never seemed worried.

“I love Johnny so much and he can do anything he sets his mind to,” said Johnny’s mom. “But I agree that his essay was a little subpar. If this is what it takes for Johnny to find himself and become the responsible adult I know he can be, then so be it.”

Jacobson’s friends noticed him missing in early January, but his unexplained absence didn’t raise any alarms for them.

“I figured he was on some bizarre JanTerm internship,” said Jacobson’s best friend. “I know plenty of people who didn’t show up to school because of an internship. I wasn’t at all concerned by it.”

While his friends were busy enjoying their JanTerms, Johnny learned to make a fire in the snow and how to build an igloo.

“It was hard the first few days but eventually I met some friendly mountain climbers who gave me some tips for survival,” said Jacobson. “The hard part was trying to find which way was up and which way was down.”

After three weeks of dangerous climbing, a search and rescue helicopter took Jacobson back to safety. Jacobson immediately set about writing down his ideas and what he saw, though his mother wrote them off as being hallucinations.

“I swear I saw that bear from The Revenant poking around a tree but I got out of there as fast as I could,” said Jacobson with a shiver. “You see things up in the mountains.”

With one toe lost to frostbite and a well-organized paper in hand, Jacobson returned to school and presented his essay to Economy.

“As unique and life changing as this experience was I’m just not sure if this essay is good enough,” admitted Economy. “Honestly I don’t think Johnny has the writing skills necessary for pulling off a story like this.”

Though Jacobson spent several free periods in the Writing Center working on the essay with seniors Maya Bradford and Jamie Pastan, he finally agreed with Economy and admitted defeat.

“I couldn’t properly describe what it was like to be trapped on a mountain for three weeks and how that changes a person,” explained Jacobson. “I think I’ll just write about losing that one basketball game instead.”