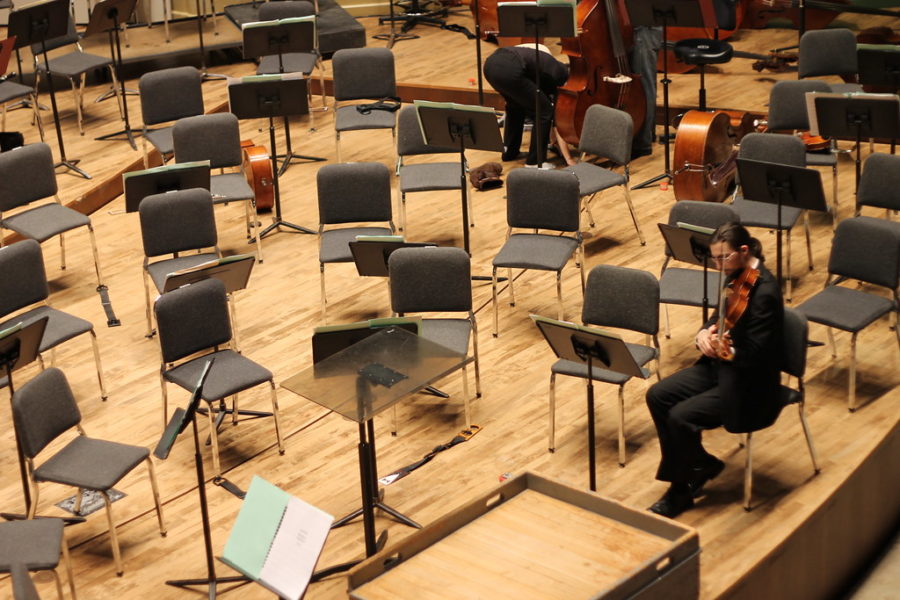 During every sixth period class, the sound of stringed instruments fills the high ceilings of McCain Chapel and spills into the Pressly foyer. The sound of a single, heavenly instrument stands out among the dissonant hell being produced on the stage. Who else but senior Tobias Liu could produce such a gloriously divine sound?

Since the beginning of his existence, Liu has been a designated violin prodigy. It is said that he was born clutching a miniature instrument and sight-reading Violin Concerto in D by Sibelius. By age three, Liu had already invented an entirely new style of playing. By age seven, he had set, and still maintains, the world record for the greatest amount of bow hair broken while playing a single piece.

However, this 2021-2022 school year marks the final year of Liu’s reign as concertmaster and an end to the “Golden Age” of the Westminster Chamber Orchestra. As a final goodbye to the beloved violinist, Scott Stewart and Linda Cherniavsky have made the executive decision to dissolve the chamber orchestra entirely.

“It just won’t be the same without him,” said Stewart. “Since we can’t recreate the sound that Tobias brings to the orchestra, we just decided to not play at all.”

This decision, while not made lightly, still sparked controversy among the students and faculty. In fact, many were saddened and angered upon hearing the news.

“Why is the orchestra dissolving?” asked Brooks Batcheller, dean of students. “The orchestra is an integral part of Westminster student life. In fact, the real question is, why is Tobias graduating? Just hold him back or something, and boom, problem solved. We still have a good sounding orchestra, and we still have Tobias!”

In contrast, others expressed happiness at the discontinuation of the class.

“My mom makes me take this class, bruh,” said an orchestra student who wishes to remain anonymous, for fear of their mom reading this article. “I just want that extra free. Shoutout to Tobias for graduating, he really clutched up for my schedule. You a real one, Tobias.”

But what does the concertmaster himself think? Well, much to the chagrin of eager reporters, the person with the most valued opinion on this hubbub, Tobias Liu himself, has denied all requests for interviews. Furthermore, he even refuses to issue a statement regarding the issue.

However, reports of Liu caught staring wistfully at the doors of McCain Chapel and even shedding a tear or two whilst passing through Pressly foyer indicate a potential grief over the end of the Westminster Chamber Orchestra.

“Tobias is more than the lifeblood of the orchestra,” said junior Colin Funkhouser. “The orchestra is also the lifeblood of Tobias, and frankly, I don’t know if he can handle the post-graduation separation. He’s like…uh…Atlas from the Greek myths! Did that sound smart? That sounded so smart.”

In addition to concern regarding Liu himself, the main concern that overshadows the decision to dissolve the orchestra still remains unresolved. What will the school do without an orchestra and without Tobias Liu when Messiah rolls around every December?

“We are physically incapable of playing Messiah without Tobias,” said Stewart. “I used to not understand why students didn’t like Messiah, but after listening to us rehearse without Tobias, I understand.”

Note: This article, like all of our articles in the April Fool’s edition, is satire. Laugh.