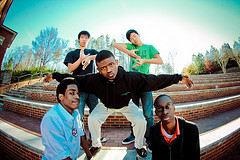 Cloud 9: n., informal; a state of elation or great happiness

“The name and the group were an escape to a world of creativity, melodies, and movement that was unreachable without the avenue of dance,” reflected name-smith and founder, alumnus J.T. Tarpav. “Cloud9 is the representation of dreams, pain, love, and friends. We just showed it through dance.”

Started in 2007 by alumni Tarpav, Robbie Greenfield, and Harrison Larkins, and junior San Williams, Cloud9 has become Westminster’s unofficial hip-hop dance crew, performing at talent shows, dance concerts, and an assembly on hip hop. The current crew is led by seniors KK Huang and Damari Weaver. Junior Nigel Walker is the only other returning member this year, with new members junior Jonathan Leung and freshman Remi Matthews now part of the crew. Being part of Cloud9 has been significant to each member in different ways.

“I guess [my favorite part is] unleashing my creativity as a dancer,” said Weaver. “And choreography. Especially group choreography. That’s probably my favorite thing. I’m not really a fan of freestyle. I like group dancing.”

“I like teaching people, but after a while you just want to let go and freestyle,” said Huang, “where you turn on the music and you listen to the lyrics, listen to the beat, and interpret it your own way.”

“My favorite part about being on Cloud9 is probably watching KK a lot,” said Leung. “He’s really good and it’s good to learn from him because he’s been dancing for a lot longer than I have. It’s always good to have someone who can teach you different things. [What I like is] really just being able to grow and learn different things at the practices.”

“My favorite part would probably be doing what I love with a bunch of people who maybe I wouldn’t normally hang out with,” said Matthews. “I didn’t even know KK or Damari or any of these guys until they invited me.”

Dancing has served as a unifying activity and as a medium for the crew’s members to express their individual styles.

“Cloud9 is made up of really just anyone who can dance and likes to,” said Weaver. “[We are] dynamic. We have a lot of interesting styles. It’s really a conglomerate crew of whomever we can find.”

“[We are] strangers brought together,” said Huang, “through a common art.”

The crew has evolved since its creation.

“Last year, we goofed around a lot,” said Huang. “But this year, it’s more structured. Usually what we do is, we go inside, listen to the music and decide what songs we want to do. Then, if Damari or I have choreography, we’ll teach them. And at the end we usually freestyle a little, play around.”

With high hopes, Cloud9 is planning on expanding their performance venues.

“Other than talent shows, we’re [probably going to] do the dance concert,” said Weaver. “Then there’s a performance at the High we can do.”

When asked about what he sees in the future for the crew, Weaver said that, after he and Huang graduate at the end of this year, “there will still be a spark. I hope it becomes something that inspires other people to join.”

“Hopefully after we leave, everyone is [going to] continue dancing,” said Huang, “and we’ll find new members.”

To help with this transition, Huang and Weaver taught a dance class a little while ago.

“I was surprised overall at the amount of people that [came],” said Huang. “A lot of new faces showed.”

“I felt like it sparked a lot of inspiration,” said Weaver. “People came who you’d never expect to dance. They’d even been practicing at home because they’d been inspired.”

For now, however, the crew looks to make the most of this year. They plan to try out for this year’s second talent show in June and are looking at expanding their dancing to outside of Westminster.