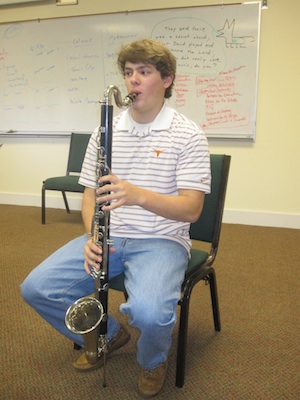 Size, location, student to teacher ratio, food, housing. High school seniors look for a lot in potential colleges. For Daniel Oglesby, a band program was one of the largest considerations in his college search. Oglesby, who applied early decision to Wake Forest as a junior, was admitted in November this school year and will be a member of the schools marching band.

The Wake Forest Marching Band, along with the Pep Band, forms the Wake Forest University Athletic Bands. Together, they are referred to as the ‘Sotogab’ which stands for ‘Spirit of the Old Gold and Black.” Sotogab is one of the university’s largest organizations, and is the oldest college marching band in North Carolina.
Oglesby’s decision to participate in a collegiate marching band was influenced by several of his relatives.
“My cousins play in the marching band at Wesleyan [High School], and I’ve watched them play in it,” said Oglesby. “I wish Westminster had one.”
At Westminster, Oglesby has participated in the band program for 7 years, beginning in 6th grade. In high school, he has played in the Wind Ensemble—formerly known as the 11-12 Symphonic Band—for all four years. He primarily plays the B flat clarinet, but is as proficient in playing the bass, E flat contra, and contra bass clarinet.
Oglesby didn’t always know he wanted to participate in band while in college, but he was encouraged by many people, including another cousin, a current drum major at Wake.
“I had heard a lot of cool things about Wake’s marching band from [my] cousin,” said Oglesby. “I thought it was something I’d want to pursue.”
In late August, Oglesby made a trip to Wake Forest and met with band directors. He learned more about the programs and opportunities he would have, as well as spoke about the instruments he played.
“You have to show that you’ve had prior experience and let them know that you’d be able to play the kind of music they play,” said Oglesby. “You also have to be coordinated.”
While Oglesby has no experience in marching band, he is excited to try it.
“I hope he doesn’t have two left feet,” said band director Paige Barber.
In addition, Oglesby was required to obtain a recommendation from a band teacher stating that his musicianship could translate into a marching band environment on the football field. Freddy Martin, director of the high school Wind Ensemble, wrote the recommendation and detailed Oglesby’s qualifications.
“[Martin and director Scotty Jones] have had almost nothing bad to say about marching band,” said Oglesby. “They have made it sound like something I would enjoy.”
At Wake Forest, Oglesby plans on playing the B flat clarinet in the marching band, but could also play the bass for the school if he added a neck strap. He is excited about pursuing band as an extracurricular in college.
“I’ve heard that the clarinet section is student run, and we’d rehearse at the head clarinetist’s apartment on campus,” said Oglesby. “The hardest part is definitely memorizing the music to play while you’re marching on the field. It’s like playing music while dancing.”
The Wake marching band will not be Oglesby’s only musical pursuit. Once he arrives at Wake Forest, he plans on auditioning for the Ensemble, which is similar to Westminster’s band program. Auditions occur during the first semester of freshman year.
Oglesby hopes to bring with him the lessons he has gained in the Westminster band program.
“The Westminster band has taught me about musicianship,” said Oglesby. “It’s not about how well you sound individually, but how well your sound integrates with the sound of the entire ensemble.”
Delete Image
Align Left
Align Center
Align Right
Align Left
Align Center
Delete Heading