Senior inspires others through art 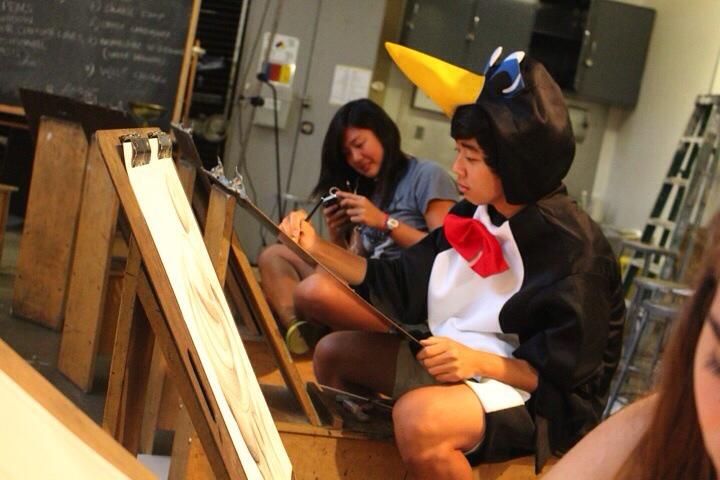 The world is a canvas, especially to budding artist Sang-Jin Lee.  Though a busy senior involved in a variety of extracurricular activities, he always finds time to invest in his art. In addition to creating his own artwork, Lee is an active member of Embryo and Creating Community.

Lee is a relatively new face in the visual arts sector of Westminster. Though he only began taking art classes in sophomore year and joined Embryo and Creating Community during his junior year, Lee has consistently excelled in all sectors of his art career.

“He showed great promise in the beginning. I was shocked to see him in the classroom, as I had never seen him before,” said art teacher Lauren Sleat. “But right off the bat he showed me that he was very talented.”

Sleat has taught Lee since he began at Westminster, and has been impressed by his work, as have his other teachers.

“He obviously did very well. In general it was a year where he realized that he wanted to take art seriously,” said art teacher Ben Steele. “He started asking me about summer programs and eventually went to the Washington University in St. Louis this summer, a phenomenal summer program for dedicated artists, and also my alma mater. It was this kind of arc where he came in being interested in art and left with a real sense of purpose and began thinking about his future. That became evident in his working style, he was always in the studio during his free time, drawing and just hanging out.”

A contributing factor to Lee’s success is his passion for art and the dedication he shows to it in and outside of the classroom. Although he has not exclusively focused on art in his academic career, Lee uses art as an escape, sketching between homework assignments and drawing whenever he feels something he needs to put something on paper. Lee also frequents many museums in Atlanta, simply to observe, learn from, and be surrounded by great art.

“He has been a permanent fixture in my room since I’ve known him,” said Sleat. “He spends all of his free time in here. I see him here during school, after school, office hours, and open studio. This is true, he truly wants to be here.”

While he is not free drawing, he works constantly on projects for class. Within class, though an expert on a variety of styles of art as shown by his large portfolio, he began to develop his own distinctive style.

“I’m really interested in illustration,” said Lee. “That relates to communications design, which is the arts departments of companies, the ones that make the advertisements. Within that, I try to make narrative pieces, and have stories in my work. Given that, I want my art to be relaxing, and make people notice little things in their lives that most people brush off as not important. If you look deeper there’s a lot of great stuff all around you.”

His illustrative designs were finally showcased at the end of junior year with their open-ended final project. Lee decided to make a five-paneled comic strip using his printmaking skills, with much praise from peers and instructors. Lee is also able to exercise his love for illustrations in Embryo, the annual creative arts publication, and has taken on a major role there as a senior.

“This year I’m a head editor at Embryo,” said Lee. “With that comes another level. Instead of just selecting anonymous student art and literary submissions, I will have to organize and format the magazine as well as creating an overall theme and feel for the magazine.”

He and Steele, one of the faculty heads, are also involved in Creating Community. The Creating Community Cohort is a student group that enjoys analyzing and visiting public spaces and engaging in dialogue concerning the effect of art on a community space.

“Creating Community looks at public spaces and steps we can take to improve a public space,” said Lee. “We see what’s working and what’s not. Living Walls Atlanta, for example, goes to places that are generally more run-down and then clean them up by painting murals. That makes people more inclined to visit those areas. It increases activity in the area and overall helps build the community. Though we don’t actually paint the murals, we still learn about the art and its effects. And, when we went on our capstone trip, that year to New York, we actually got to meet an acclaimed artist who was planning a public space in Detroit or Chicago, and were able to talk to him about his work.”

Though not an extremely large or publicized group, Creating Community attracts Westminster students from all sectors of art such as musicians, performers, and visual artists, like Lee.

“It’s a good group,” said Steele. “And it’s great that Sang-Jin joined last year and is continuing to do so this year. It is another example of him truly opening his eyes and seeing how diverse art can be, how you can get involved in it in so many different ways, and how it can become a life in a really positive way. With it you can shape other people’s lives as well as connecting with people who think like you. It’s really powerful.”

A truly outstanding student, Sang-Jin Lee has impressed and inspired peers, advisors, and instructors throughout his brief yet illustrious high school art career.