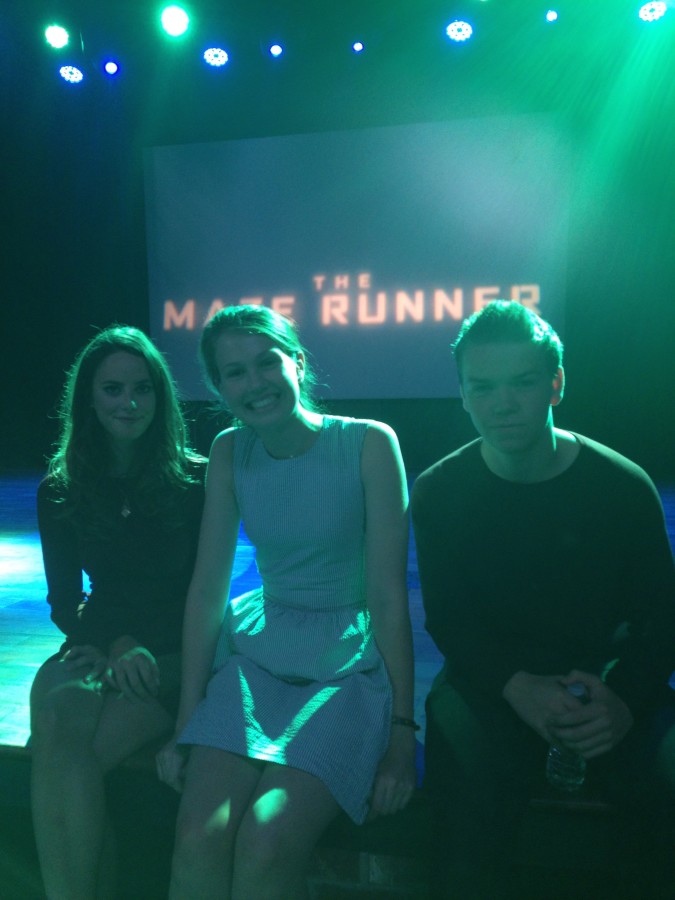 At first glance, 20th Century Fox’s new film The Maze Runner, slated for a September 19 release, seems to have all of the same ingredients that made teen dystopian films like The Hunger Games such a worldwide phenomenon; a popular book series basis, a malicious government that for some reason only attractive teenagers can overthrow, and an attractive rising star anchoring a cast of actors carefully chosen for their appeal to the 18-25 year old demographic. However, The Maze Runner, adapted from the young adult series by James Dashner, does little to distinguish itself in the oversaturated teen dystopian movie genre.

Ultimately, the movie only really deserves credit for having the most aggressive courtship of potential viewers I have ever seen. I was contacted by the film’s public relations agency in my role as a student journalist for The Bi-Line to participate in an exclusive pre-screening and roundtable interview with the three biggest stars: Kaya Scodelario of the popular British TV show Skins, Will Poulter, whose rap of TLC’s “Waterfalls” in We’re the Millers made my family cry laughing, and of course, star Dylan O’Brien, made famous among the tween girl set by his role in MTV’s hit Teen Wolf.

Excited by the possibility of a free movie, I invited my steadfast friend Kathleen Lebreton to the pre-screening at Atlantic Station’s Royal Cinema. I had imagined the screening as only open to an exclusive, small group of tastemakers, so I was surprised to see what seemed like half of metro Atlanta packed into the theater. A perky publicist cheerfully warned us audience members against recording any part of the film at any time. I then settled into my comfortable seat and tried to watch the film with an open mind; after all, the public relations agency had been very kind to give me free tickets and a chance  at an exclusive interview with relatively-attractive B list actors.

Unfortunately, no matter how hard I tried to enjoy it, The Maze Runner did not sweep me off my feet into the swirling depths of Dylan O’Brien’s hazel eyes. The plot featured many trite dystopian tropes: evil government, artificial environment that only ethnically diverse teenagers inhabited, and one brave hero who dares to explore and incite a revolution against said evil government. The first hour, in which O’Brien’s character Thomas is delivered via high-tech dumbwaiter to a rural community populated by teenagers known as the “Glades” that he soon realizes is part of an immense, shifting stone maze, majorly dragged, despite the humor of seeing Poulter playing against type as a bossy redneck. It wasn’t until an hour in, when Thomas plumbs the depths of the maze and Scoderlaio’s character, one of two female characters, arrives that the action started to pick up. This promising middle was offset by the predictable ending that answered none of the film’s probing questions, instead setting up a possible lucrative franchise. The film offered little satire or social criticism in the vein of The Hunger Games’ dark parody of the absurdity of reality TV; rather, it involved testosterone and strange mechanical spider creatures.

“It was definitely just ok,” said Lebreton. “I feel like it’s directed more at middle school boys than at an older age group.”

As the credits rolled, the perky publicist implored the audience to stay for a Q&A session with O’Brien, which was not enough to lure half the theater to stay, us including. Math homework is math homework. The distraught look on O’Brien’s face upon seeing the mass audience exodus was enough to tug on my heartstrings, although any shred of affection I had for him was quickly erased when I saw that both Kathleen and I were a couple of inches taller than him.

Upon reflecting, I realized that there were in fact several characteristics that distinguished The Maze Runner from similar movies. First, there was a male protagonist with only two female characters, one of whom has a small part.  For me, this is actually a step backwards; Katniss Everdeen and similar characters had done so much to show Hollywood that a movie anchored by a strong female character could draw both male and female audiences. Junior Molly Wright seconded my opinion:

“The Hunger Games really gave young girls a strong female character to look up to. Katniss showed girls that you don’t need to be a damsel in distress- that you can be strong and fight your own battles.”

Second, there was absolutely no romance to be found; O’Brien and Scodelario’s characters didn’t engage in even a chaste hug or longing look. I actually found this a welcome change from overplayed love triangles.

Armed with these observations, I arrived at the student press conference at a West Side restaurant ready to engage in some hard-hitting journalism. Yet another over-caffeinated publicist regretfully told us O’Brien was sick and would unable to join us, leading my dear mother to later quip  that he must have enjoyed the Atlanta nightlife a little too much. Hung-over star or not, the press conference must go on, and I found Scodelario and Poulter delightfully British and personable. Both spoke eloquently and intelligently about the film-making process. A girl from DeKalb School of the Arts beat me to punch by asking Scodelario what distinguishes The Maze Runner in the crowded market.

“First, I think it’s almost unfair to constantly compare teenage dystopian films, as other movies in the same genre, like superhero movies, aren’t constantly asked what distinguishes them,” said Scodelario. “But I think our film is different because it’s less dark and really focuses on working together. I was actually initially attracted to the script because there’s no romance, and I think it’s important for young girls to be able to see female characters in a movie like this who aren’t falling in love.”

While I certainly appreciate Scodelario’s feminist interpretation of the film, I was definitely distraught by the paucity of female characters. Of course I understand the film is based on a book series, but how hard would it have been to add more female characters or increase the existing ones’ screen time?

I tried to ask a thoughtful question, but barely got a word in in the paultry ten minutes the six of us were granted. Some poor intern then took pictures of us with Scoderlario and Poulter and we were escorted out. The look into the frantic world of public relations was honestly more interesting than the movie itself.

Ultimately, I wouldn’t recommend The Maze Runner to anyone looking for a thoughtful, complex, or even just entertaining movie. Instead, buy a ticket for your thirteen-year-old brother and spend two hours filing your nails. It will be a lot more emotionally fulfilling.