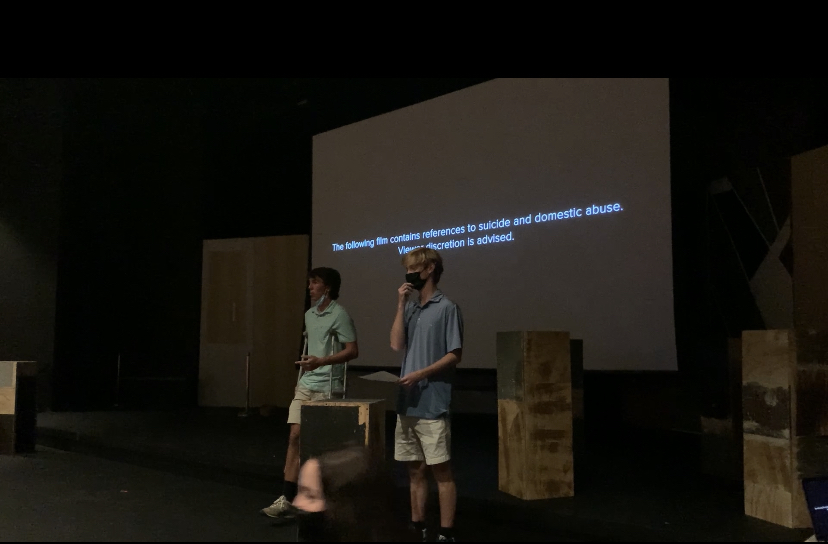 After eight months of planning and production, Westminster’s film club Studio W released their short film Blake and Vivian to all audiences on Sept 3. Viewers can find the 20-minute video on the Studio W YouTube channel.

The plot revolves around two people: Blake, a teen weighing between maintaining his struggles and ending his life, and Vivian, a mysterious girl, who attempts to dissuade him from taking his own life.

Before coming around to the message of suicide, screenwriting seniors Sam Levine and Rachel Doman started with a big picture idea.

“It started with a boy and a girl in the middle of a street, finding a connection,” said Levine. Once ideas began bouncing around, however, the club decided to spotlight the conversation surrounding suicide. Daniel Searl, faculty advisor for Studio W, supported the crew by contacting resources around the school.

“Because of the theme, we did help connect the writers and directors with counseling,” said Searl.

As for which part of the film was most difficult to execute, crew members pointed to the scenes on the road. This portion of the film captures Blake riding a bike in a pitch black night, with Vivian trailing behind. To capture the two actors conversing on the road, the film crew had to move as one behind them. Senior Patrick Nagy, director of Blake and Vivian, recognized several of the hardships the team encountered while filming.

“Behind the camera, about ten of us would just be walking backward holding sound equipment, lights, etc., trying to stay at the same pace as the actors,” said Nagy.

The scene that followed, Vivian pushing Blake off his bike, required multiple practice takes before it was cleared to actually film.

“We did it on grass, and then on the smaller road, and eventually moved on to the bigger roads,” said Levine.

The team also paid special attention to making sure motion or noise from behind the scenes did not make it to the camera. For example, elements such as sound from external factors were taken deeply into consideration.

“We had to have our shoes off so the microphones didn’t pick up our footsteps,” said Nagy.

The attention to detail and months of hard work ultimately led to a product well-received by the Westminster community. Students offered positive reviews and appreciated the message behind the film. One of the moments that stood out the most to students was the bike scene at the beginning of the movie.

“I loved the scene where Blake was riding his bike and the background noise of his parents shouting,” said freshman Cassandra Reiner.

In addition to the sound effects placed for emphasis, viewers also appreciated the distinctive portrayal of the pushing off the bike.

“The scene that stuck with me the most was when Blake was pushed off the bike by Vivian. Vivian was really passionate about ending the suicidal thoughts of Blake,” said sophomore Saanjali Ganesh.

Students also agreed that the intent behind the film came across clearly to address the sometimes unhelpful things that suicidal people can hear.

“I would 100 percent recommend this movie to others because it talks about such a serious topic that often is portrayed so horribly wrong,” said Reiner. “The movie made fun of the stupid, and frankly unhelpful, things people tell suicidal people that ‘will cure everything’ and really got down to some real reasons why life is worth living.”

The origin of the film, which happened in October, started with conceiving broad ideas and planning the big picture. The pre-production process wrapped up in April, and filming ensued from April to June.

“We had to get a good version of the movie done by July 1 for the All American High School Film Festival (AAHSFF), the biggest festival we submit to,” said Nagy

The AAHSFF, which is the world’s largest high school film, photography, and media arts festival, receives thousands of submissions every year, and reserves only a few spots for the top productions. These results could not have been possible without the dedication and drive of the Studio W crew.

“One of the great things about Studio W is that it is student driven, student led, and student executed,” said Searl.

Students interested in joining the Studio W team have the opportunity to join without prior experience. According to Nagy, those interested can contribute to shoots, no matter the size, and without pressure.

“The main goal of our club is to help make film accessible to students at Westminster,” said Nagy. “We welcome anyone to join, regardless of any previous experience.”