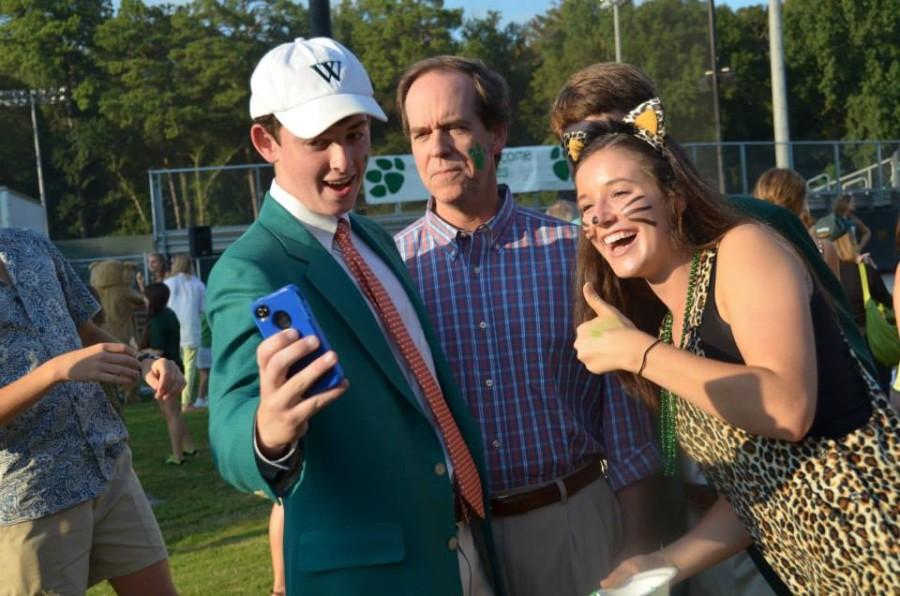 We’re interested in your vision for this school and for yourself in the immediate future.

KE: So one thing that I know is really important to me is that I get to sort of really understand how this school works, who’s here, what’s important to the people who are here, and some of the history of the school. Those things I’m learning every day, I get a little more each day, like that. I haven’t done what I will do, which is kind of in that vein, getting out into the school and seeing it in action, seeing what’s happening. I want to listen to people’s opinions, what their experience has been like, that kind of thing. And you know, that’s really important for every obvious reason, it’s particularly important in a funny way for me because Westminster doesn’t feel that unfamiliar to me. I’ve spent a lot of time in Atlanta, I have family in Atlanta, and know Dr. Clarkson really well. I know a lot of parents here were students of mine, I ran into another one this morning.

And you had ties to Lovett as well?

Are you a scrabble master, Mr. Evans?

KE: Hmm…I would say that I’m better than he is. I wouldn’t say that I’m… Although I will say I had a 120 point word once. It was not against him, though, it was against someone else. So I do know…You know, I’ve known Mr. Wells for years and years. So one of the things that’s true here is that I’m familiar enough to be dangerous. I could think I know more than I do. So I’m kind of making sure that I know what I’m supposed to.

What do you think about the fact that you’ve come at a very interesting time in Westminster history, when the school is trying to make some big changes?

KE: Well, I think the school is doing exactly the right thing. You know, I think it is on the right kind of changes. And frankly, some of the things that the school has done in recent years have been pretty mind-to-metal changes, they’re big changes and they’ve come one after the other. A lot of them also, what I would describe as, are changes that allow other changes to happen, like redoing the schedule allows a lot of other things to happen. I have a feeling that in time, maybe three to five years from now, we’ll look back on some of these changes and say “That was the thing that unlocked a lot of other stuff that ended up happening.”

How do you think that education is changing at Westminster?

KE: You have to think about your education differently than students did even seven, eight, ten years ago. I think you have to be much more strategic. You sort of a have to look out at the world and say, “What is it I need to have in terms of habits of mind and how I think about things and experiences that I’ve had that will allow me to have a breadth of perspective and also be pretty smart, both at once.”

KE: It really is kind of a movement from a time when academic excellence was defined by the absorption and mastery of a body of knowledge to academic excellence being defined as a kind of engagement with knowledge and information that makes a difference in the world. And so the old model was very driven. [Now], it’s kind of leading to this whole different thing; it’s a whole different way that you engage and think and use that in this rapidly-evolving environment and economy. Now you’ve been educated to see the connections.

What do you think the role of the old model is these days?

KE: I do think that there will probably always be a place for grinders, because there will be a need for people with narrow technical expertise in an area, as long as people understand that. But the people who will employ those people will be the ones who can see the connections. But the thing is, the solutions to problems come from people who are able to take those things and see how they fit together, how you can apply one to the other. And that is a kind of vision that you get from a more integrated form of education than what we’ve been accustomed to in the past. Also, our efforts in evolving global connections and integrating arts with math and science stem from this.

How do you view the role of work experience, both summer and during the year, in this new vision?

KE: I think it’s huge. I think the other thing is, in addition to that, and at least for some students, it could actually be a huge game-changer. Certainly there are companies in Atlanta that have relationships all around the world, that would allow for at least some contact in that way. It might be a little shorter-term than what you would have here, but it’d still be some exposure.

What do you want your legacy to be at Westminster?

KE: You know, I think this sort of transition from information-based mastery of a discipline that’s happening across all education to a not entirely unrelated but somewhat different definition of academic excellence is going to look like it still has a long way to go. And I think it is not only in things like curriculums and schedules but it is also in spaces. And so as you think about what a school wants to do and be from a student experience point of view you have to marry the right kind of spaces to that.

How do you think the new library will reflect the idea of new spaces?

KE: [Libraries are] about engagement and collaboration and cooperation. If you then imagine, “what’s the equivalent of that in classroom spaces and common spaces and art spaces?” The design challenge around all that is real and interesting. I think that the other thing is the huge amount of potential for how Westminster can increasingly draw from and be integrated into the resources in Atlanta, and how we can think of the city as an extension of the campus in really meaningful ways.

Up until a year ago, you were a teacher. How do you think that ties into your new position?

KE: Well, you all should know that I started out teaching and coaching because I loved it, and I really never gave it up.  It doesn’t feel like work…that’s the point, that’s why I want to do this.

What are some ways that you think Westminster immediately prepares students for college?

KE: Part of [college] is showing up and knowing your ears are perked up for that sort of thing because I’ve had enough exposure to them that I can now choose. And a lot of that is about an academic experience, but a lot of that’s about non-academic things- it’s often called “performance character”. It’s not moral character, it’s not right and wrong character, it’s grit and resilience and flexibility and the lack of shyness to approach the professor and say, “I’m the person to do that research with you. I’m interested in that,” which for some people takes a few years, but Westminster students graduate and are ready to do that the first day they show up to college.

So, how do you think the class environment should be to create this character?

KE: You want to end up in an experience where students feel like they can take initiative around things, they have experiences that kind of build their sense of independence. You know, internships involve driving to some office with a bunch of people you don’t know and being able to shake hands and meet them and find your way through the whole thing. Even those kinds of things, they seem like small things but you’d be surprised at how many college graduates don’t do that very well. [It’s] such a little thing, but it’s a life skill.

How do you view the role of tradition within Westminster?

KE: I think of tradition in two ways. I think there’s tradition that binds and glues the community together- the Christmas performance of the Messiah is one of those community traditions that lends a sense of connectedness. And then there’s another thing that I would describe as more traditional, not such a tradition, but a traditional way that something’s been done. Most all everything that’s traditional at one point or another was new. There was a moment actually in Westminster’s history when it was a pilot site for the Advanced Placement program, it was one of the first schools with the program. The Advanced Placement program replaced something that was in place before it, it was new, but now it feels part of the tradition. But at one point it was new. I love tradition, but traditional has to earn its keep. If you think that doing things in a traditional way in the teaching and learning process is the right way to do it, then do it. I think it’s different than things that are traditions that sometimes you do just for their own sake because they provide you with a connection to the past that’s meaningful and fun. That’s where I draw the distinction. I don’t think there’s any value in slashing and burning traditions; I think schools need to be careful about that.

KE: To me, whether its conservative or liberal is a whole lot less important than what the next twenty years hold, and how are we aligned to prepare students for that reality? At some level, liberal or conservative is neither here nor there to the facts we have on the table in the future that we can see. Let’s sit down and have a conversation on what we really think is going to happen in the world in the next five to ten years. What’s it going to be? Let’s not just take the present and say the future is just more of the same. Because it’s not. That laptop, someday in a future that you’ll be able to see, will be obsolete. You’ll say, “yeah, we once had laptops.” It’s just inevitable that it’s going to happen. And that is a much more important conversation for schools to have in terms of them saying, “well if what we’re trying to do is anticipate that, then we need to be thinking today about what we can do- it’s like we need to throw a dart out into the future, look where it lands, and then work our way backwards. What can we do today to get to the future?”