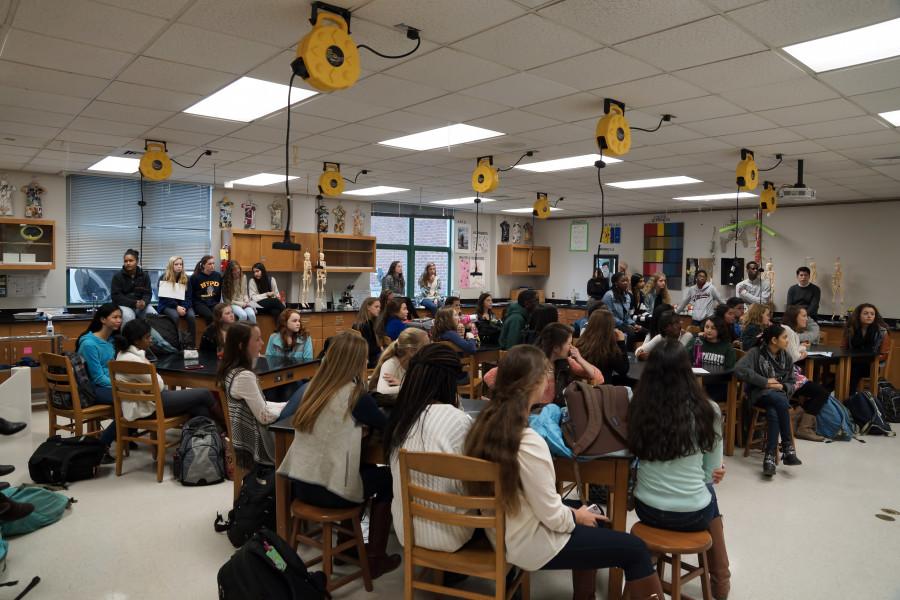 Emerging this year, the Pre-Med Club is a brand new club founded by freshman Bronte Bacchetta and junior Catherine Benedict. The two serve as co-presidents and work in conjunction with vice president junior Maya Bradford and faculty sponsor Daina Kelly, Westminster’s newest biology and chemistry teacher. The driving force behind the club’s conception was the desire to create an environment and a community that fosters discussion on the many complexities of the medical industry, especially in regards to occupations such as nursing, surgery, psychology, dentistry, and more.

“Our goal is to provide a forum for students to explore careers in the health professions,” said Benedict. “We know that it’s something a lot of people are interested in, and there wasn’t anything addressing it at the time.”

According to Bacchetta, a total of around 60 students have attended their club within the first two meetings alone, a testament to the general intrigue in medicine amongst the student body that Bacchetta shares.

“I have always been interested in medicine, and when I first came to Westminster I was surprised there weren’t already medical-related clubs,” said Bacchetta.

The club was formed after the now co-presidents were brought together by Chanley Small, the head of the science department, who heard pleas for similar groups from both and decided to propose a merge. Bacchetta preferred to focus on the pre-med concept, while Benedict wanted one with emphasis on public health.

“We made a Google doc and submitted it as an official club,” said Benedict. “Then we spent a while talking about what we wanted to get out of the club. We had to compromise on some stuff, but overall it’s good that we’re both in charge so it’s not just one person that’s leading.”

Kelly, who also feels strongly about health and medicine, was then brought in to supervise them.

“I’m very passionate about international health care and did some work previously in Ghana and some other things,” said Kelly. “I was excited when I found out about it. They’ve done everything. I’m just pretty much their cheerleader.”

In the past two meetings, the main event has varied from watching a video of surgeon, the uncle of a current Westminster student, saving a boy’s life, to a talk by an ear-nose-throat doctor from Emory.

Due to their ability to offer real-world knowledge, bringing in speakers will be main objective of this club.

“So far we’ve been able to network through our connections of parents of alumni,” said Kelly. “Hopefully we’ll eventually get a diverse group.”

The main objective of having speakers is to give the students an idea of the college and medical school process that is required to have a career in a health-related field.

“Currently we are planning on having Orthopedic, ER, ENT, Thoracic and Primary Care doctors, to name a few, as well as a neuroscientist from Emory who will speak on genetics,” said Bacchetta. “We also have doctors lined up from the CDC who will be speaking about the Ebola crises and bioterrorism.”

Though speakers are an integral part of the club, so too are other important learning tools such as discussion.

“In times when we don’t have speakers, we’re going to talk about different health issues like Ebola,” said Kelly. “Also on the public health field we can talk about access to health care, different issues and things like that.”

In the future, the co-presidents plan to present internship and volunteering opportunities to club members. Furthermore, they plan to introduce another philanthropic component to the club, either international or local, because of the abundance of public health and medical treatment problems that can be addressed. In addition, future meetings might include dissection kits or field trips to places like the CDC museum or public health research facilities, as well as many more exciting aspects.

“Hopefully we will eventually create some sort of med student, college student, Westminster student liaison program, hopefully through Emory since I went there,” said Kelly.

Despite still not having decided on an official name, the Pre-Med Club plans to offer an abundance of exciting opportunities for anyone interested in a career in the medical feild.