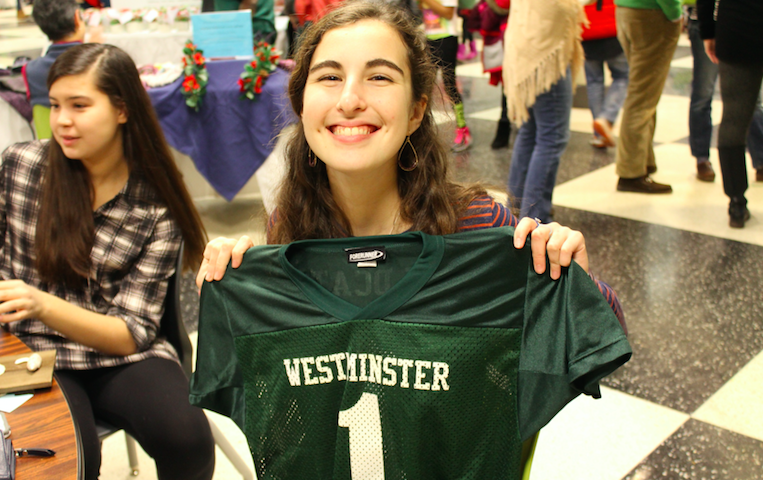 Looking for that perfect holiday gift for your family members, friends, or even your Secret Santa? Every year, the Alternative Gift Fair, held this year on Dec. 4, is the place to buy those presents while also supporting a good cause.

The Alternative Gift Fair was created nine years ago during the Philanthropy 101 class, a summer program that studies the principles of philanthropy.

“One of the discussions we had in the class one day was: ‘Were we good stewards of our money?’” said community service coordinator Stan Moor. “One of the students told a story of how every year he would give his uncle a $50 tie every year that wouldn’t be used. He thought that the $50 could be used for something good. So, we wanted to sponsor an event where people have the opportunity to make donations or support non-profit groups.”

The process to create the Alternative Gift Fair turned out to be relatively short. Moor went to Bill Clarkson, the president of the school at the time, who thought it would be a great idea. However, the first year was not very successful.

“We had [the fair] in conjunction with the last home football game,” said Moor. “We thought we had to have it with a big event so people would come. But it was too early for the holiday season and not many people from the football game came.”

The next year, the fair was held during the first week of December in order to attract a larger crowd.

Similarly, to promote more of a holiday spirit, a Santa has been invited in recent years.

“[With Santa], we hoped to lure elementary school students and their families to come,” said Moor.

These younger students have been a big help for senior Haley Vincent, who has hosted a booth every year since she was a freshman.

“The first year I participated, there were a lot of little kids,” said Vincent. “I sold hair ties and scarves and it was really successful.”

“Awareness [from the fair] has been great,” said Vincent. “I have met a lot of people who have been interested in what I do.”

Similar to Vincent, junior Edward Holliday and sophomore Xavier Holliday use the Alternative Gift Fair to advocate for and support their international service project, Brothers4Literacy. Their organization’s mission is to provide underserved youth with learning, reading and lifelong resources that will ensure success in years to come.

“This year will be our second year doing the Alternative Gift Fair,” said Edward Holliday. “Last year, we made and decorated ornaments and then sold them.”

The profits from the fair were used to help support their mission trip to Jamaica, where they brought books, clothes, school supplies, shoes, Girl Scout cookies, and laptops for local students. Vincent and the Holliday brothers are not the only students who participate, however, because this year there will be 11 student-run booths. In addition to the Destiny Foundation and Brothers4Literacy, they represent the ALS Association, Atlanta Habitat for Humanity, Heifer International, Kicks for a Kause, KIVA, the Salvation Army, Society for Orphaned Armenian Relief, Stop Hunger Now, and Toys for Tots.

“My goal is to have more and more student groups involved,” said Moor. “Right now, [the fair] is made up of about 50 percent student-run organizations.

For students interested in participating in the fair next year, the process to get involved does not require much.

“It was not a difficult process at all,” said Holliday. “I just had a conversation with Mr. Moor and asked if we could participate in [the fair].”

In addition to the student-run organizations, there are multiple Atlanta-based organizations who host booths as well. These include the Atlanta Humane Society, Children’s Literature for Children, Development in Gardening, the Good Samaritan Health Center, Make-A-Wish, Midtown Assistance Center, Moving in the Spirit, and New American Pathways.

During the first couple of years, Moor reached out to many of these organizations. Now, Moor often is referred by parents or receives calls from outside organizations who want to participate. The only requirement to do so is to be a reputable 501(c)(3) charitable organization.

As Moor is retiring this year, he hopes that the Alternative Gift Fair will forever be a part of his legacy.

“It has become a community building event and a great way to educate our community,” said Moor. “I hope to have more diverse and different groups involved.”