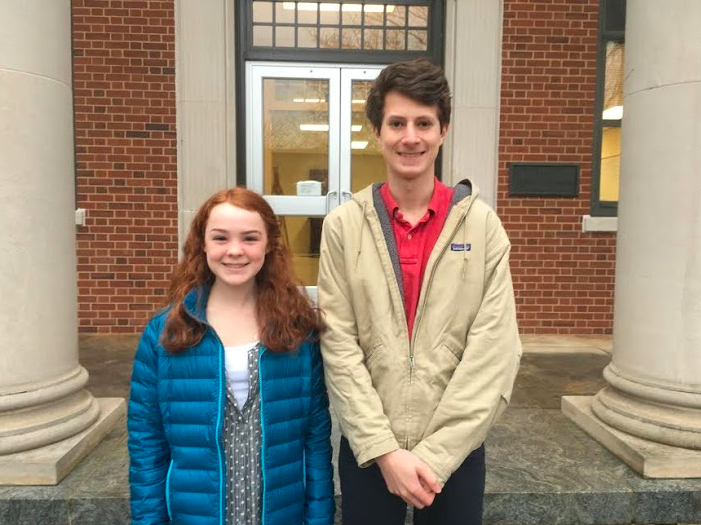 The Upper School offers many ways for students to give back to their community by tutoring, volunteering, and donating. There are many who seek to go beyond the opportunities provided at the Upper School and perform community service outside of school. Some students have gone as far as to set up and run their own charities, while some donate a lot of their time to the improvement of the lives of others.

To honor adolescents like these all throughout Atlanta, the Atlanta InTown magazine has set up an award known as “20 under 20.” This year, two Westminster students, sophomore Julie Street and senior Jamie Pastan, received recognition.

“‘20 under 20’ is an award that recognizes 20 people that are under the age of 20 for work they’ve done to give back to the community,” said Street.

Street was given this award for her work with the National Charity League, which is a service group created for mothers and daughters. Through this group, Street has spent hundreds of hours volunteering at charities such as AGAPE, Atlanta Food Bank, Atlanta Christian Ministries, and many more.

“My goal is to put in at least 100 hours of volunteer work each year,” said Street. “I made this goal last year, reached it, and am well on my way to 100 this year.”

Street is particularly devoted to the charity Operation Gratitude, an organization that works to provide soldiers and veterans with care packages.

“Operation Gratitude is particularly special to me because four generations of my family served in the armed forces of America, one of which still serves to the day,” said Street. “It’s the least I can do to give back to those who serve in the military.”

Putting this much time into volunteering is very difficult due to all of the responsibilities that high school students have and the challenges they undergo.

“As years go by, my schedule gets busier and busier,” said Street, “making finding time the most challenging part.”

Street was nominated for the “20 under 20” award by her mother, and did not actually know about her nomination until after the fact.

“I had no idea about it actually,” said Street. “Someone outside of it nominates you, and my mom sent in the nomination.”

Pastan was nominated by his multivariable calculus teacher, Lina Ellis.

“The faculty get emails every year from people in the communications office with different opportunities for teachers and students to be involved in, and one of those was looking for ‘20 under 20’ nominations,” said Pastan. “Mrs. Ellis remembered that I said I did community service and sent me an email asking for more information. From there she just nominated me.”

Pastan was nominated for his work as the founder of his own organization, Trading Smiles. Through this organization, Pastan collects old trading cards from donations or online stores, repackages them, and then gives them to the Atlanta Children’s Shelter. Pastan got the idea for this nonprofit when he found many old baseball cards while cleaning up his house.

“These cards had been sitting in my drawer for seven years, and they were cool to look at, but I didn’t appreciate them in the same way that I had when I was younger in first and second grade and really freaking out about baseball,” said Pastan, “so I decided to give the cards to kids who would appreciate them again like I once had.”

While winning the “20 under 20” award is a very huge honor within the Atlanta community, both Street and Pastan were not very involved in the nomination process and have not noticed any changes in their day to day lives.

“Mrs. Ellis submitted the nomination, and the only contact I ever had was with Mrs. Ellis, and then eventually I heard from the communications office that I won,” said Pastan. “I filled out a little info sheet for the paper, and then after that I was just in it.”

For the nominations, Pastan and Street’s sponsors had to fill out an application and write about the community service that the students had been doing.

“I filled out the application and wrote a few paragraphs about how Jamie came up with the idea, what he has accomplished so far, and what his dreams and goals are for the future of Trading Smiles,” said Ellis.

One of the major motivations for Pastan and Street to commit so much of their life to helping their community was that they were doing something that they were passionate about and interested in. This is what they would advise others who seek to give back to do as well.

“Find something that you’re passionate about. And that’s super cliché, but I’ve always wanted to do some big community service project, but I didn’t do something that I was really into until Trading Smiles,” said Pastan. “Even today I’ll be sorting through cards of donations and I’ll find some crazy rookie card and I’ll just think that it’s really cool. I wouldn’t be able to keep up with it if it wasn’t something I was really interested in.”

As Pastan and Street will both soon graduate from high school, they both hope to find people who can continue their legacies of service and kindness.

“After I graduate from high school, I hope someone else has the same passion and steps up to the plate to continue leading the girls in NCL with all things Operation Gratitude,” said Street.