The Purpose Behind the Pennies: Westminster’s 2017 Habitat for Humanity Build

For more than a quarter of a century, the partnership between some of Atlanta’s premier independent schools and Habitat for Humanity has flourished, providing 25 underprivileged families with decent and affordable housing. While some schools have dropped out during the project’s 25-year tenure, Westminster is gearing up to celebrate its 26th year of work with Habitat. At it’s heart, the partnership between Westminster and Habitat was formed in order to contribute to the community at large, but has subsequently grown to do even more.

“I think in looking for partnerships in Atlanta, Habitat reached out to all of the nearby independent schools, hoping to take students who are somewhat of rivals on the athletic fields and flip that on its head,” said Meghan James, upper school service coordinator. “Specifically, by bringing them [students] together to have an experience based around a project that engages and helps the greater Atlanta community.”

Over the years, the project has evolved and changed, while still keeping the core values that define it intact. The end product, a completed home, has never changed, but the project has developed by including more of the Westminster community than the volunteers building onsite.

“The partnership with Habitat for Humanity has been pretty consistent because their mission is to build homes for people who may not have been otherwise able to afford it,” said director of the Glenn Institute for Service Learning Callie Crabb. “However, we have changed our program over time to appeal to the interests of our own students and to engage the younger students more.”

Additions to the program include the lower school students’ habitat bank fundraiser and the middle school’s annual competition between advisements to raise money. These changes aimed to allow the whole school to be a part of the Habitat build and also proved to be incredibly helpful in fulfilling Westminster’s yearly 15,000-dollar pledge to the build. Additionally, the increased involvement with the lower and middle school is a driving force behind students’ desire to participate in the project.

“I first heard about Habitat in a fifth-grade assembly,” said senior Chris Block. “I had donated throughout lower and middle school, so when I had the chance to volunteer, I decided that I wanted to try it out.”

Experience and comfort levels varied between all of the volunteers. For some, the build was a new challenge, while others had previous experience coupled with interest in the program.

“My dad does a lot of carpentry and construction-related work , so I have a basic level of understanding when it comes to building,” said senior Damaris Zamudio. “I thought it would be really interesting to be involved in that.”

On site, volunteers aided the construction in a variety of ways, providing a helping hand wherever it was needed. Throughout the course of the eight-day build, work ranged from piecing together the foundation to painting, and everything in between.

“I hammered in giant nails that held the foundational wooden planks stretching across the top of the house,” said Zamudio. “It was a lot of work, but I was so proud of myself for being able to do it.”

The build was repeatedly categorized as a physically demanding, but rewarding, project. Compared to other service projects that the volunteers had been a part of, many mentioned how strenuous the work was, but stressed that it was worth it.

“It definitely involves a lot of physical work,” said Block. “You have to stay mentally engaged the whole time to make sure that nobody gets hurt. That being said, it’s really rewarding to see the house evolve over time. It’s almost like your baby.”

Collectively, other service opportunities paled in comparison to the build, due to a number of reasons. The opportunity to watch the house progress over time served as a high point for many.

“It’s exciting to watch the house change as you put effort and time into it,” said senior Worth Talley. “It’s very different from Agape [tutoring], because I feel like there is less of a payoff in terms of what you can actually see, unless you tutor one kid over a long period of time and develop a relationship with them.”

Students and faculty loved interacting with others directly involved with the build, specifically with the homeowners at the dedication of the house. The dedication, a special ceremony to commemorate the house, came at the end of the project.

“The best part was being able to see the house dedicated,” said Zamudio. “The family that gets the home is there and seeing their reaction to the house was a amazing experience.”

This year’s homeowner is Ms. Mosley, who is currently pursuing a bachelor’s degree, and her seven-year-old daughter. The homeowner is responsible for investing “sweat equity” in the project, meaning that they work alongside all of the volunteers throughout the eight-day build. Habitat also provides a series of workshops before and after the build in order to acclimate the homeowner to their newfound homeownership and what comes with it.

“Habitat does a great job of educating the new homeowners,” said James. “They host lectures and workshops that cover what it means to own a home, how to steadily pay your mortgage, and other resources like that.”

After the dedication of the house, the quality of the homeowner’s life drastically improves, as Habitat describes homeownership as ‘the platform on which a family lives out today’s realities and prepares for tomorrow’s transformations.’ Some volunteers have witnessed this transformation firsthand.

“I think that owning a house or having a place to stay alleviates so much stress,” said James. “Knowing that shelter is taken care of opens up so much more mental and physical energy that can be put into other areas of life.”

Every year, the program aims to provide a secure and stable environment for the homeowner and their family. With each build, James hopes to impact more people by planting a seed of empathy and connection to the community outside of Westminster inside each of the volunteers.

“I want them [volunteers] to feel a sense of pride and ownership that comes from knowing that they might only be 16 or 17, but they can truly and authentically made a difference through someone in their community,” said James. 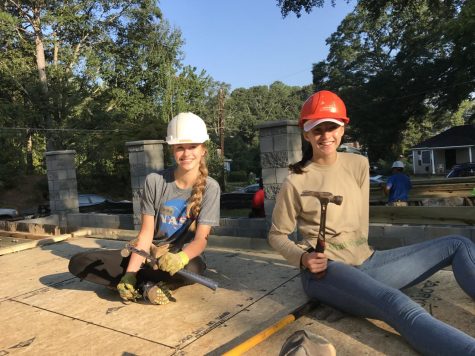 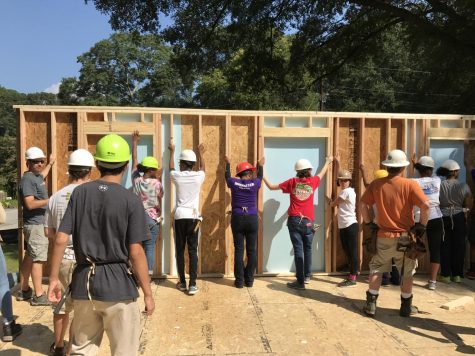