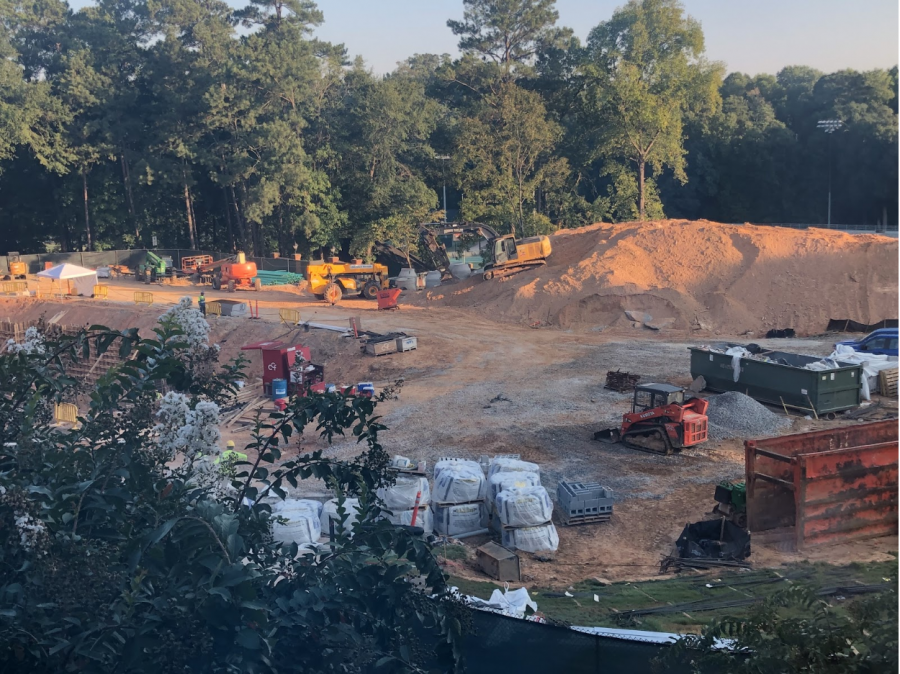 On August 14, the Westminster community returned to campus to see Campbell Hall hollowed out. Students gawked at the large hole in what used to be Campbell drop-off, and headed to the new Westminster Village for classes on what was previously an open field. With school now in full session, students and faculty members are adapting to the changes and anticipating the evolution of Westminster’s campus.

Westminster’s construction plan is now underway with many projects visible around campus, the culmination of years of planning. Back in 2012, a strategic plan was made to guide the school through the evolving world of education. The plan spoke of creating schedules and spaces that align with the teaching and learning of the future. The Upper School rotation schedule with four classes a day and the addition of JanTerm was the beginning of this plan in action. However, it was JanTerm that brought the need for newer spaces to the attention of the faculty.

“JanTerm particularly highlighted the constraints of the space of our school,” said Upper School Dean of Academics and Curriculum Jim Justice.

During JanTerm, different courses brought attention to the limits of the spaces within buildings such as Campbell and Askew Hall. The wide range of topics and hands-on experiences available in JanTerm are better suited for buildings that allow for movement. For example, the Art and Science of Violin Making course gives students the opportunity to assemble a violin by applying ground, color and varnish, fitting pegs and the bridge, and installing the saddle, sound post, tailpiece, endpin, nut, and strings to the violin. The Creative Design and Welding JanTerm also has students using power tools while learning to weld and form metals with the proper principles of design.

“The challenge for Askew and Campbell Hall is that they are the original buildings here,” said Justice. “They were opened in 1953 with rooms built for a time when students did a lot more sitting at desks listening to lectures and a lot less moving around.”

Building classrooms for the future is a lofty goal. The construction plans aim to create buildings that will allow for walls to be knocked down a few years down the road to create a new space that students may need.

“The directive from the Board of Trustees was to really focus on the vision for how people learn and how our teachers can help students better,” said Vice President for Finance and Operations Tina Boyd. “We have to build facilities that reflect those opportunities.”

One exciting example of these upcoming facilities is the Campbell Hall grab-and-go service. The service intends to provide relief to students who do not have time to wait in a 20-minute lunch line for food at Malone and provide students with additional ways of getting snacks throughout the day. This renovation was specifically planned to help students, given the number of students who spend large amounts of time on campus.

“That is what differentiates Westminster,” said Boyd. “It is not an adult-centered campus. It’s a student-centered campus. When I am at a meeting anywhere from the chairman of the Board of Trustees to working with an art teacher on staffing, the common thread is everyone’s focus is the student experience.”

Because student experience is the main focus at Westminster, the timeline for the projects is fast-paced. The new Campbell Hall–Hawkins Hall–the stadium improvement, and the parking deck will all be finished by August 2020.

“That’s the value of a clear vision,” says Boyd. “That’s a lot in one year, but when you plan well you can get things done quickly.”

To ensure efficiency of the actual construction, time was spent from 2014 to 2017 finalizing plans for the renovations in addition to those intended for the future. After the first stage of construction, the next stage will involve the new Westminster Center which will welcome visitors to the school. There will also be a new Scott Hall containing state-of-the-art learning labs and an updated version of the academic building at Askew Hall. Additionally, a community plaza will be created near the updated stadium. These areas aim to inspire natural experiences where people are encouraged to interact and share knowledge.

Another driving reason for the construction is energy efficiency. Over the summer, a new central line was installed on campus. The new Campbell Hall will have a chilled beam cooling system, making the space more energy efficient, and the area near the new stadium will have solar paneling on the top.

The idea of efficiency is apparent around the campus. Students received their new student IDs earlier this month and faculty has had theirs since the summer. These badges can be used for many things from purchasing snacks at the Campus Center to releasing print jobs at printers. The badges will even help open buildings soon.

Though needing a badge to print was a new idea to many at Westminster, the badges have made the printing process much simpler. Every printer on campus was replaced with newer, networked models placed in convenient locations. These printers allow students and faculty to send their print jobs to all Westminster printers, select a convenient printer, and release their print with their badge there.

This new process makes printing at Westminster much more efficient. Before this summer, there were 357 printers across campus with nine different models or manufacturers. None of these printers were networked.

Now that printing is possible on campus again, the next phase is to get the new printers set up to do different tasks beyond just printing. Apps can be downloaded on the printers that allow you to scan a document and have it print out a translation in a foreign language. The printers can also be sent an audio file and produce a transcribed version.

“It’s examples like these that are different, that you don’t think about when discussing printers,” said director of operation projects Michael Carroll. “These things have that capability, so we’re thinking about piloting some of the neat features with uses in education.”

In addition to eliminating outdated models of printers, the new printers cut down paper waste on campus. Previously, unclaimed papers were often left in the trays of printers, as students either forgot to pick up their prints or decided to print somewhere else. As students now have to walk to the printers to start the printing process, the problem of wasted paper is reduced. However, this was just an added bonus to the new printing system, not the main reason for it.

“Westminster is always trying to be green and help the environment,” said Carroll. “It definitely has helped with our waste, although that wasn’t the primary focus.”

Overall reactions to these changes have been positive from both the faculty and the students, as they are all excited about the new building. Even the seniors, who will not be here for the renovations, are excited for the future of Westminster.

“Construction is going to be great for campus life in the future,” said senior Kerrie Lou. “It’s definitely a hard adjustment, but I think students have been handling everything really well and in the grand scheme of things, it’s going to be so beneficial.”

The seniors, in particular, have embraced the construction with smiles. On the first day of school, they even came equipped with hard hats.

“The seniors have been particularly great,” said Justice. “I think they’re a great class and we’re lucky to have them leading us in this kind of year where we are doing construction.”

Justice has seen the school through many changes such as an earlier renovation of Campbell and Askew Hall that took students and teachers out of those buildings for one semester each. He also witnessed the building of Love Hall, and saw Turner Gym double in size. He watched the building of Clarkson Hall, and experienced the bridge by the front gate being under construction for about two weeks. Through all of these changes, Justice reports a positive reaction from the Westminster community and states that the community has grown closer together through the experience.

“I think it says a lot about the community that these times bind the community more tightly, rather than fracture it,” said Justice. “I think some of the construction times on campus have been some of the times we’ve had that tightest knit community.”

With the environment around Westminster evolving, those on campus will need to adapt to the extra time and walking involved in getting around from the Wildcat Village to Robinson and Askew, especially those with injuries.

“The construction has made getting between classes a lot more difficult,” said sophomore Austin Reiner. “And since I’m injured right now, it’s slowing me and my recovery down.”

However, extra time in the schedule is factored in for transitions between classes and all faculty members are aware of the situation.

Remembering to carry the badges will be an adjustment too. In one day, IT had five students report lost badges. When students lose their badge, they are to report their lost badge to the knowledge bar. A new badge will be printed for them and their accounts will be charged seven dollars.

As Westminster’s campus continues with construction, the students and faculty look forward to growing together as a community, continuing to learn from each other in classes while navigating the changes in campus life. Already, the community is acclimating to the learning cottage classrooms, new printing system, and additional walking. All Wildcats are curious and excited to see the new facilities and opportunities that the future of Westminster will hold.