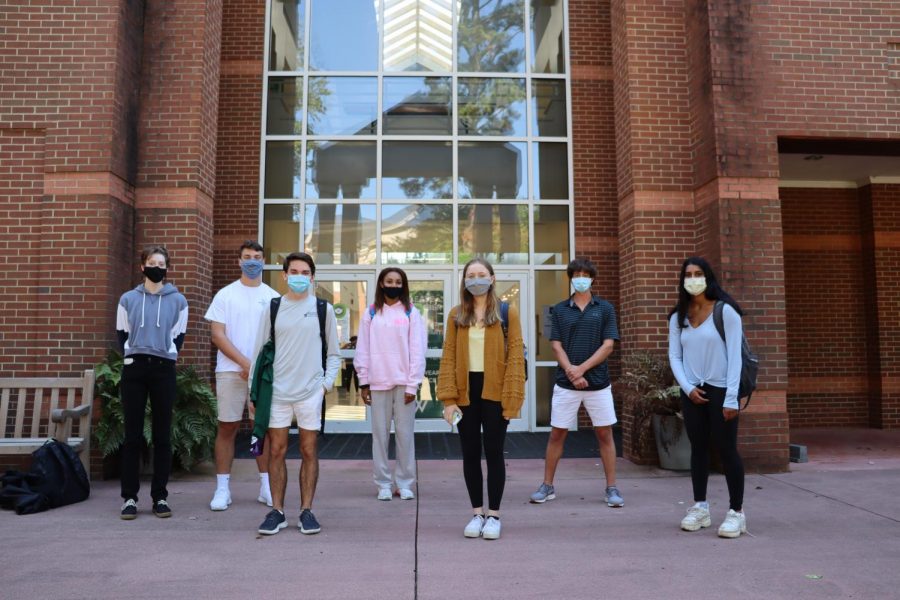 Members of the discipline council pose for a photo outside Broyles.

On Sept. 17, 2020, the Discipline Council at Westminster shared a video announcing the new anti-discrimination pledge that will be sanctioned on campus. The pledge will be signed by all students and faculty within the next few weeks of school.

After the nationwide Black Lives Matter movement gained traction over the summer, the Discipline Council created this pledge in order to focus on preventing discrimination at Westminster. The pledge serves as a spark for many discussions about racial inequality and discrimination on and around campus.

“Systemic and structural racism exists in American history more broadly, but those problems obviously exist on a very local level as well,” said Stephen Addcox, a faculty advisor of the Discipline Council. “It was important for us that we develop a statement in which we acknowledge that there is a problem, but that we also try to recognize the efforts that we can make to try and address that problem within our community.”

The Black Lives Matter movement was founded on July 13, 2013, following the acquittal of George Zimmerman, who fatally shot African American teen Trayvon Martin. The killing of George Floyd by police officer Derek Chauvin set in motion many recent Black Lives Matter protests and movements across the United States. The recognition of these recent and historical movements sparked discussions which eventually lead to the creation of the anti-discrimination pledge.

“The goal for the pledge was to create a spoken rule about how students should behave in terms of any types of discrimination,” said senior Eleanor Carroll, a member of the Discipline Council. “We just wanted to make sure that after the events of the past few months that this was really a main focus within Westminster’s community.”

Although this is just a starting point, the Discipline Council hopes this will lead students to speak up if they witness acts of racism or discrimination. The goal for the pledge is to create and maintain a safe space on campus for everyone by spreading awareness about racial injustice in the world and more specifically at Westminster. By doing something even as simple as signing the anti-discrimination pledge, the Discipline Council hopes this will enable students to speak up and start conversations with each other.

“The goal is to help people be more comfortable with standing up for other members of the community and themselves,” said senior Discipline Council member Allie Woods. “I know in the past people have been scared to come forward, and so that is what we are trying to work on. The school has everyone’s backs.”

The anti-discrimination pledge closely resembles the honor code at Westminster that students sign at the end of every test or assignment.

“This is a different kind of honor; treating everyone with dignity and respect is the barest minimum that we can expect of kids here at Westminster,” said Ana Maria Szolodko, an Upper School history teacher. “I would hope that as the future leaders of tomorrow, which is how I see our student body, they should be aware not only that there has been a problem regarding how people are treated at Westminster, but also understanding that empathizing with other people is a process, not just an event.”

Many students believe that this pledge will bring about self-awareness regarding racially discriminating comments to Westminster’s student body.

“I think the pledge will bring awareness to the fact that we can all do better to be against discrimination,” said freshman Catherine Quillian.

Others believe the pledge provides an opportunity for students to use their voice on campus in an attempt to make the campus a safe place for everyone.

“I think that the anti-discrimination pledge is very beneficial to our community because it allows students to speak up when they hear discriminatory comments at school,” said junior Emilie Hankla.

Some students, however, believe the pledge will not have a large effect on the Westminster student body and that students will not willingly educate themselves on basic human rights and racial discrimination.

“I think this pledge was created because Westminster feels compelled to respond to the inequality in America,” said junior Amelia Wright. “I don’t think it will affect the student body because many people are unwilling to educate themselves and change their beliefs. Also, many people associate racism with politics, which shouldn’t be the case since your opinion on human rights should not be affected by your political opinions.”

Some students also believe that the school should adopt educational resources on racism and its presence in the Westminster community, rather than just stating that racism will not be tolerated.

“I think the pledge is a good start, but the school isn’t implementing a plan or at least not one they are telling the students,” said junior Stephanie Visoso. “Westminster could be doing more to actively educate kids on how to be anti-racist instead of telling them to just do it.”

Although there is much work left to do in our world and local community, the anti-discrimination pledge serves as a starting point in educating students on racial injustice.

“I think the goal of the pledge is to make students conscientious of our efforts to create an inclusive community and what that looks like,” said Anna Major, the Upper School language department chair. “I hope this is just a starting point that will lead to more than just checking something off our list.”