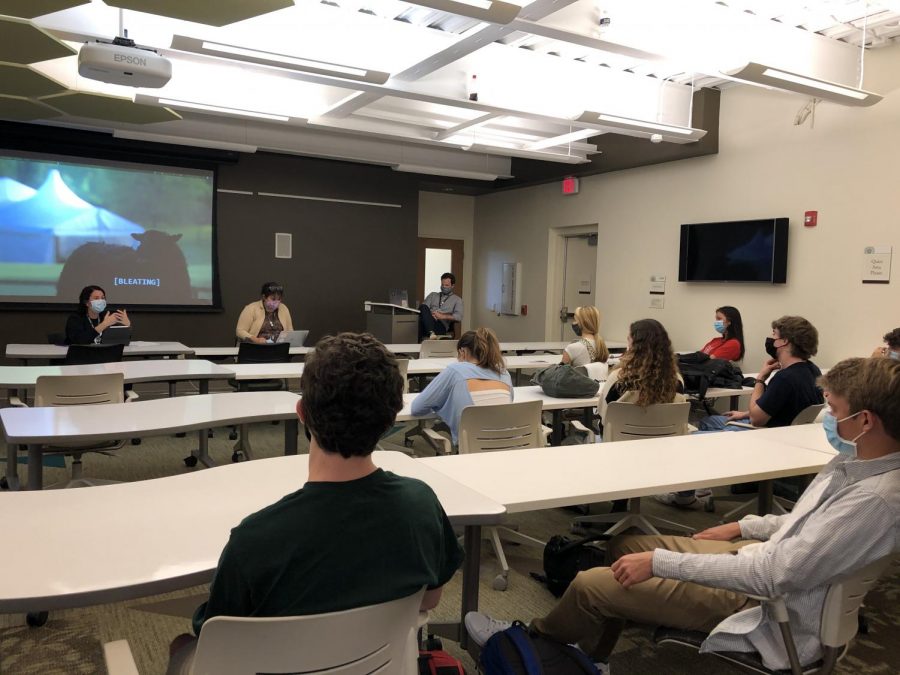 In previous years, students would meet with their affinity groups outside of the school day. However, this year, affinity groups in the Upper School have had the opportunity to meet every Friday on campus.

“The adjusted meeting times are likely a result of Westminster’s renewed public commitment to anti-racism and anti-bigotry toward any traditionally marginalized populations following the 2020 summer protests against racial violence and inequity,” said Scott Stewart, a faculty leader for UNITED. “Having meetings during the school day also allows for athletes and other students with extracurricular commitments to attend.”

Having time for these groups to meet on Friday afternoons gives students the flexibility to be able to attend sports practice or other outside-of-school activities while being able to reconnect and meet with their affinity groups.

“It’s important to have designated time during the school day for students who want to attend so that extracurricular obligations aren’t conflicting with their ability to participate,” said Judy Osborne, a faculty leader of Cocoa Conversations. “Some groups continue to have additional meeting times so that students who might identify across groups can attend both. An example might be a student who is biracial and would like to attend two different group meetings or a student who identifies as LGTBQ+ and would also like to attend this meeting as well as one that is race-based.”

One of the new affinity groups at Westminster is AWARE, which stands for the Alliance of White Anti-Racists Everywhere. AWARE’s faculty members include Clare Costello, Laura Drewicz Ewing, and John Terry. This affinity group typically meets at the Gaebelein Learning Commons on the bottom floor of the library during the allotted affinity group period.

“AWARE is an anti-racist alliance with people of color in our community and, to that end, provides an opportunity to help white students examine and develop their complex racial identities in a community of allies,” said Terry. “Every meeting is centered on some sort of very short reading, podcast, or video to help give us tools and language about race and identity.”

AWARE differs from other affinity groups in that it focuses on how to support those of different races around campus by having conversations about anti-racism and equity.

“Even though AWARE is an affinity group, I wouldn’t say that we serve the same purpose as other affinity groups,” said senior Hugh Trotter, one of the leaders of AWARE. “I think that while other affinity groups intend to provide safe spaces to celebrate the culture and traditions of their minority group, AWARE understands that white people have historically been able to to express their opinions in our society. Instead, we specifically focus our conversation around racism and how we can be better citizens of Westminster by supporting the voice of minorities on our campus.”

“These groups are optional, safe, and celebratory spaces that aim to help students resolve conflicts, relax, share successes and concerns, and feel like they are understood and connected,” said Osborne. “It’s a space where people with a common identity or experience come together as a collective for support, inspiration, or relationship building, but most importantly they can be seen for their individuality.”

Cocoa Conversations offers a safe space for African American students to discuss certain topics or connect with students who may have common interests.

“It is kind of like a safe space where we know everyone has something in common, which is the experience of being Black at Westminster,” said junior Elijah Patterson. “Depending on the day, we might have a specific topic to talk about or we might just have time to connect with others within the group. For example, we once talked about the success of Black Panther after the movie came out and the accomplishments of other Black people in the media. The affinity group helps me draw connections with others and also make friends that share common interests.”

Another group on campus is SAAG, an affinity group for students who identify as South Asian. Amy Patel acts as the faculty advisor for SAAG and, this year, the club tries to meet twice a month on Zoom as well as in-person if the meeting space adheres to COVID-19 restrictions.

Café con Leche is an affinity group for Latinx/Hispanic students on campus. Café con Leche’s faculty advisor is college counselor Juan Acosta, and the group meets over Zoom each week.

“Topics we discuss can range from our familial and cultural traditions to our specific Latinx/Hispanic background. We have done fun things like watch videos, listen to podcasts, and program with other affinity groups to discuss colorism and intersectionality,” said Acosta.

The final affinity group that centers on racial identity is Mooncakes, which is for students who identify as East and Southeast Asian, Pacific Islander, or biracial/multiracial Asian American. The Mooncakes faculty leader is Eric Khong, and this affinity group meets virtually at least once every two weeks.

“Mooncakes supports students by creating spaces where students feel safe being their authentic selves,” said Khong. “In many ways, students of color learn to navigate a world very different from their world at home; it is in some ways a joy just to be around others with shared experiences, even if only for a little while. It also supports students by giving them room to talk about the issues facing the AAPI community at large.”

Although many affinity groups on Westminster’s campus are associated with race and cultural identity, UNITED helps create an inclusive community for students who identify as LGBTQIA+.

“UNITED provides a positive, affirming space for LGBTQIA+ students who are in any phase of their journey,” said Stewart. “It is an opportunity for students to gather and engage in discussions in a safe space. UNITED works in tandem with Spectrum to translate discussions into forms of action that will lead to a more equitable, accepting, and inclusive environment for Westminster students.”

During affinity group time, there are a variety of activities UNITED takes part in.

“We often have discussions about Westminster culture, joys and concerns in students’ personal lives, and updates in local and national news,” said Stewart. “We also include programming like ‘Coming Out Strategies,’ ‘How to Survive the Holidays,’ ‘LGBTQIA+ friendly college campuses,’ and LGBTQIA+ Bingo.”

UNITED meets weekly, but because students are in various phases of their coming out journey, the times and locations of meetings are confidential. Students should contact faculty leaders Jennifer Dracos-Tice, Scott Stewart, Karen McCarthy, or Steve Frappier if they are interested in joining UNITED.

Affinity groups are a crucial element in promoting a safe and welcoming environment at Westminster. Whether it’s learning about traditions, taking part in ice breakers, or listening to guest speakers, affinity groups provide students with inclusive spaces to connect with peers who have shared experiences. All of the groups and their faculty leaders are listed in the weekly updates for interested students.