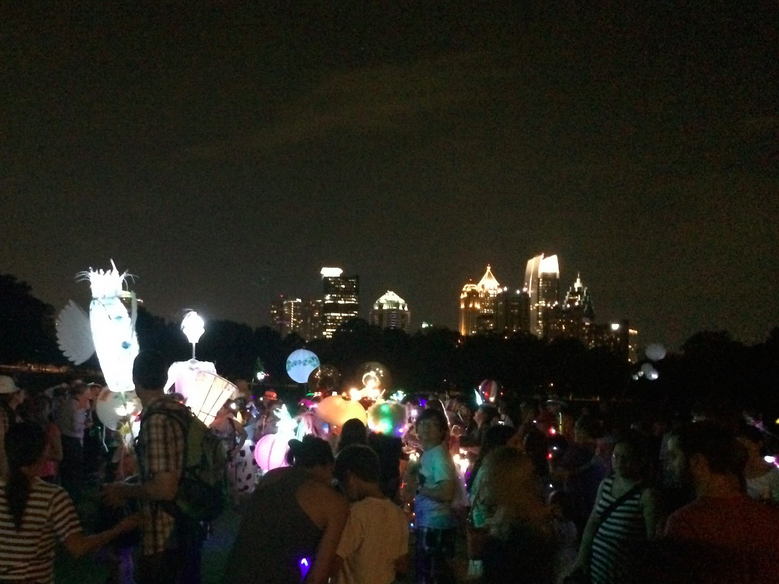 The Beltline Lantern Parade looks, sounds, and feels as if a carnival has decided to pick up its stakes and wander down the 2.5 mile concrete stretch between Irwin Street and Piedmont park, along the Beltline’s Eastside Trail.  Complete with marching bands lit up in the spirit of the parade, 30 foot lantern “giants” who walk the parade route, and over 20,000 participants this year, the lantern parade is on its way to becoming a signature Atlanta event.

The parade began in 2010 and for the first couple of years was one of Atlanta’s best-kept secrets.  It wasn’t until 2012, when 1,200 people attended, that Atlantans really began to take notice of the event.  Then in 2013, parade organizers were stunned when over 10,000 participants and spectators came to join in the festive atmosphere.  That the number of people in attendance continues to grow speaks to the electric, almost magical atmosphere of the event, and to the fact that an event doesn’t need a complicated schedule or high-powered sponsors to be great.

The Beltline Lantern Parade is great because it brings people from all over the city together to have a good time and unwind. I wouldn’t have thought that I would find myself on a Saturday night in September walking down the Beltline, carrying a lantern and laughing my head off with friends, but after I went for the first time last year, I was hooked.  There’s something freeing about such an offbeat and joyful event.  It’s exciting to feel like a part of something bigger: both literally, as a small part of the trail of color, light, and music that extends as far as the eye can see, and more figuratively, as part of a community excited about the Beltline and all that Atlanta has to offer.

This year, the Westminster community got involved in the Lantern Parade on a greater scale than ever before.  Artist, parade specialist, and founder of the Beltline Lantern Parade Chantelle Rytter hosted a lantern-making workshop for the Creating Communities cohort along with several students, who took their creations to the parade.  Westminster teachers were also spotted among the spectators who line the trail and cheer from adjacent rooftops, overpasses, and patios.

The lantern parade is the official kickoff for a new year of Art on the Beltline, a program that funds Atlanta artists to bring their work to life on the Beltline trails.  As the largest temporary public art exhibition in Atlanta, Art on the Beltline insures that there is something new and interesting to see each time you visit.

Even when not hosting a parade, the beltline makes for a worthwhile trip.  Originally the brainchild of architect Ryan Gravel when he was a grad student at Georgia Tech in 1999, the beltline is an ambitious project that hopes to convert old rail lines to encircle the city of Atlanta and connect neighborhoods with 33 miles of green space and trails.  Though still in progress, it manifests today as four main trails open for public use.  The trails, especially Eastside Trail, are a great place to exercise or meet up with friends.  As you walk, run, bike, or rollerblade along, you’ll pass by bright murals sponsored by Living Walls, cute shops and parks, and plenty of opportunities to stop and get food.  Although it doesn’t yet connect the entire city, the beltline is also a fantastic means to explore neighborhoods like Old Fourth Ward, Virginia Highlands, or Cabbagetown.

I wholeheartedly encourage everyone to check out all that the Beltline has to offer. From trail yoga classes to cupcake shops and a full-fledged skate park, there’s sure to be something for you.  And if you happen to be free the first Saturday after Labor Day in 2015, I highly recommend the Beltline Lantern Parade.