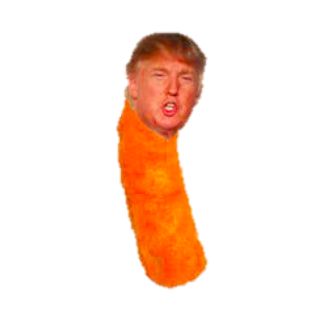 A Claymation-like figure majestically descends upon the anxiously awaiting hive of reporters. Never before has such an entrance been made. He glides down from the heavens of the palatial Trump Tower on a resplendent escalator to the golden foyer below. Reporters and photographers buzz excitedly as the new queen bee graces them with her presence—she possesses such dignity, such poise as she deigns to offer them a slight wave. The feeling of anticipation in the room is palpable. After what seems like an eternity, Donald Trump reaches his subjects and ascends the stage. History is about to be made. Never before has such a celebrity attempted to run for President of the United States.* Never before has a candidate run on the hope of “Making America Great.”**

Trump offers something completely new and never before seen in the Republican Party. He’s all shiny and orange, and no one can get enough of him.

His effect is similar to that when you first pop open that Family Size bag of Cheetos from Costco. The nauseating, unnatural orange color both alarms and entices you. Despite your fear, you know you are going to eat it. The journey through a bag of Cheetos encompasses a spectrum of emotions ranging from excitement to self-loathing to downright repulsion, similar to the reaction many had to Trump’s announcement to run for President. You start off feeling exhilarated because you have not been able to have Cheetos since 1989***, and the appeal is very real. The first handful is like an eruption of American exceptional-ism, which has a stale yet overwhelming flavor to it. But that second mouthful of cheesy puffs is consumed even more ferociously because now that you have had a taste, you crave it. You proceed to shove incoherent and unsubstantiated views on minorities down your throat. This taste like a drug, similar to the ones Mexicans are bringing across our borders.

As you continue to compulsively eat this toxic puffery, you begin to feel slightly queasy about the ingredients you have found on the bag: three servings of racism, two servings of inadequate foreign policy, four servings of bankruptcy, and 180 pounds of orange flavoring. You ignore the uneasiness in your stomach and forge on; after all, you aren’t even halfway through the bag.

The more you eat, the worse you feel. “What kind of country would allow Costco to promote this affront on human decency?” you ask yourself as you near the last one-fourth of the bag. Then you remember that insatiable hunger you experience every time you hear someone open a bag of Cheetos; the desire increases tenfold when that first crackling, unnatural sound that only Cheetos can make reaches your ears. How could anyone resist? All of the other snack foods are ignored. No one gives a second thought to that last bag of classic potato chips you have in your pantry. Why would you have the same old thing when you could have Cheetos?

At long last, you see the dust-covered silver lining gleaming up at you from the bottom. You made it! Tears brim in your eyes. Your stomach retches and seemingly threatens to collapse inward upon itself. With a mixture of pride and self-disgust, you lick the remaining impudent powder from your fingers and mouth. However, nothing can fully remove the obdurate substance. It is stuck under your nails and in your teeth, constantly reminding yourself of that time you binge-ate Cheetos for 51 minutes in your bedroom. In time the waves of nausea will pass, but in only a little more than a year, this large, distasteful, potentially toxic bag of Cheetos may just be the President of the United States. So get your Costco Plus cards ready.

*Correction: Except for Ronald Reagan

**Correction: Except for Ronald Reagan

***End of the Reagan era