A guide to Atlanta’s best donuts 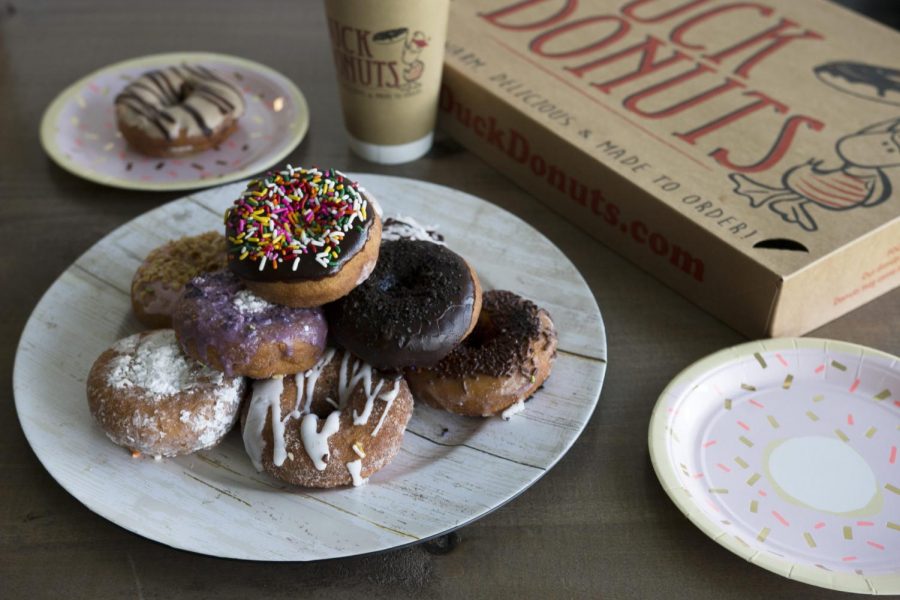 Duck Donuts is a must-visit for those with a sweet tooth.

The sun began to rise on a mildly cold Atlanta February morning. I stared at dozens of freshly glazed donuts passing on the conveyor belt at a place known best for its instant hot donuts: Krispy Kreme. Shortly after receiving my warm, glazed dozen, I sank my teeth into a donut as it melted in my mouth. Since that first trip to Krispy Kreme as a little girl, my taste in donuts has expanded past the basic chain shops and instead to the local stores which truly have the hidden gems. Don’t know any? You’re in luck because today I will be breaking down my personal favorite places in Atlanta to indulge in the delicacy best known as the donut.

First off, we have Sublime Donuts. With two locations in Atlanta, they are definitely a favorite among residents of the city. Over the years, my family and I have gone to Sublime a number of times, trying many different donuts from their large selection. Our all-time favorite is the “Fresh Strawberry n Cream” donut which is filled with freshly cut strawberries and fresh cream. In case you don’t like fruit or cream, I have a few more recommendations for you. The “S’mores Donut” (self-explanatory), the “A-town Cream” (basically a Boston cream pie donut), and the Nutella donut are all great, chocolatey choices. If you also don’t like classic donuts, try the bowtie, essentially a twist donut that’s lightly glazed. Now, if you ever make your way down to Sublime Donuts from now on, I expect you to indulge in at least one of these flavors just for me.

Next, we have Momo Cafe, a small restaurant by Georgia Tech with a meal side and a cafe side. A few weeks ago, my Dad and I made the walk to the cafe in search of their most popular and unique item, the “Mochi donut,” a treat with rings that have a chewy interior. When we arrived at the cafe, we asked for this donut only to find out that they temporarily stopped making them. We had just walked two miles for a donut, and we weren’t leaving without one. After asking about other pastries, we found out about their “Tempura donut.” Though I am not entirely sure of all of the ingredients, it tasted like a cinnamon sugar donut, so I thought it was pretty tasty. A few days ago, we made the walk yet again in search of the Mochi donut. This time around, they were available and we ended up ordering the “Matcha Mochi donut.” When I first bit in, I was expecting a sweet donut with a hint of matcha. Instead, I was overwhelmed by the flavor of slightly bitter matcha and tapioca, a flavor I was not expecting in this particular donut. It was very chewy (as expected based on my prior research), but the flavor of the matcha was definitely there. Personally, I am not a fan of matcha, but if you are, I’m sure that you will enjoy this donut.

Next on my list of favorites is Sweet Hut, an Asian bakery and restaurant with three locations in the Atlanta area. They are known for their large selection of drinks, such as milk teas and slushies, but they first started solely as a bakery. A few days ago, I went in to get my favorite drink, a strawberry milk tea with strawberry popping boba, when an assortment of donuts caught my eye, prompting me to also get the “Sweet Hut donut.” To put it quite plainly, it was a sugar donut. By this, I mean that it had the basic fluffy donut base but was smothered in granulated sugar. Even though I enjoyed the sweet delicacy, it was also quite basic (even though there’s nothing wrong with that). It reminded me a lot of the cinnamon sugar pretzel bites at Auntie Anne’s.

If you ever find yourself on Buford Highway, I would recommend taking a trip down to The Paris Baguette, another Asian bakery with a unique menu. I first went there when they added the “cronut,” a combination of a croissant and a donut, to their assortment of pastries. The cronut was created by Dominique Ansel, a New York City pastry chef. At first, the cronut could only be found at Ansel’s own eponymous bakery, but slowly made its way around New York. Though it took a while, the cronut made its way down to Atlanta, but can only be found in a few small bakeries, such as The Paris Baguette. Upon hearing about the cronut’s arrival in Atlanta, I immediately went to go try it out.  It can best be described as fluffy and flaky like a croissant, but round and doughy like a donut. Personally, I loved it. Not only was it exciting to have a treat that I had heard about for years finally make its way to Atlanta, but to be able to taste it and actually enjoy it was even more exciting. I think the uniqueness of the idea of combining two widely known pastries, the donut and the croissant, really gives it its appeal.

Lastly, Duck Donuts is another favorite place of mine to get donuts in Atlanta. They have two menus: a regular menu and a limited edition one, which I ordered off of last time to try some unique flavors. After deciding on the “Midnight Madness” and the “French Toast” donuts, both available on the fall menu, I was asked to sit in the car to wait for my order. If you’ve never been to Duck Donuts, this may seem weird, but the reasoning behind this is that the donuts are made to order. They can all be customized and they will always be served hot, much like Krispy Kreme. After receiving my donuts, I took a bite out of each. The Midnight Madness donut is a vanilla donut with chocolate icing and chocolate sprinkles. Personally, I love sprinkles, so when I saw this on the menu, I had to try it. Though the donut was on the heavier side, which I usually do not enjoy, every bite was filled with loads of chocolate, which made it extremely flavorful. I loved the French Toast donut even more. Covered in powdered sugar, the donut tasted just as I had expected: fluffy, hot, and sweet, just like actual french toast. If neither of these flavors appeal to you, then you can create your own flavor–there really is something for everyone at Duck Donuts.

As someone who loves trying new things, going to new places, and eating new foods, I’ve always made it a point to try every new and exciting thing I read about. Growing up in Atlanta, I feel like I know every road, every landmark, and every food, but when I see new things like the cronut and Matcha Mochi donut, I see a new experience in the city that I’m so familiar with. In the only place I’ve ever known or called home, I watch it evolve as new things are brought to our corner of the world, but no matter what happens in this word of uncertainty and growth, the hole will always be in the center of the donut.