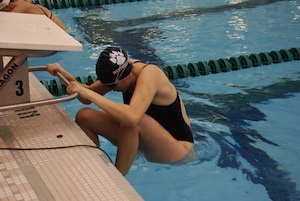 Sarah Zoellick
As they near the end of the season, the boys and girls swimming teams are preparing once again for the State meets. Captained by seniors Mason Adams, Michael Eriksen, Darren Godsell, and Frank Love for the boys, and Rachel Astles, Hays Bynum, Nicole Dayhoff, and Katherine Kerman for the girls, the Catfish have high hopes for boy teams this year.

In preparation for these final two meets of the season, the Cats swam in the Madeline Brown Invitational, held at Emory University in December, and competed with many strong schools, including McCallie, Girls Preparatory School (GPS), Baylor, Marist, and Woodward. In the Madeline Brown meet, the girls team took first, and the boys came in fourth. After returning from the break, the girls pulled out a win against GPS, but the boys suffered a loss to McCallie. Both teams lost to Baylor, one of the top-ranked schools in the nation, but the girls quickly made it up the following week with a win against Marist, one of their top rivals. Most recently, both teams trounced Woodward on Senior Night, boosting morale the week before the penultimate meet of the season, Metro.

Metro proved to be yet another stellar meet for the girls, as they finished in first against stout competition, which included rival, Marist, while the boys finished in second place.

“I don’t put a lot of stock in our win-loss record during the season,” said Higgins. “It’s all in the times.”

Because swimming is not a regional sport, any given team’s record during the regular season is not as important as it is in other sports. Participants in the state championship meet is determined solely by the speed of the swimmers, who must swim under a certain time in a given event to qualify for State, and can get their state cuts at any meet over the course of the season. This meet is the focal point of the Cats’ entire season, and due to the muted significance of season meets, it holds an especially strong presence in the swimmers’ mindsets.

The Cats have been very successful in the State meet, winning the championship 38 times in Higgins’ tenure at Westminster and only finishing outside of the top three a handful of times in the swimming program’s history.

“It’s just so exciting,” said Eriksen, “you’re racing against all the fastest people, and you’re friends with all of them, so it’s a really fun, fast, exciting way to end the season.”

One reason for the long-term success of the program may be the importance that Higgins places on enjoyment, making sure his swimmers have fun improving and honing their skills.

“With so many of these coaches it’s almost a matter of life and death,” said Higgins, “But at the end of the day it’s a sport, an activity, and you come out and try to go a little bit faster, make some progress and have some fun. If we can win, so be it, and if we get our heads handed to us on a platter, so be it… there’s a lesson to be learned in teaching people to enjoy hard work, and those who have fun day in and day out usually end up getting further up the ladder.”

“We’re all really supportive of each other, and I think we all just like to have fun,” said Bynum. “Whenever we go up to a big meet riding on the bus is a lot of fun and we all just get together and joke in the locker room, or during a meet, or during a practice, but we all like to work hard too.”

“I’m really close friends with all the guys on the team, and the girls too,” said Eriksen, echoing Bynum, “It’s a lot of fun, and a lot of hard work too, but it’s worth it.”

The Catfish have always been very successful, not because they feel pressure to do well, but because Coach Higgins encourages them to enjoy what they are doing, to support each other, and to focus on long term success, rather than winning individual meets. These efforts will prove pivotal come February, when it will take a total team effort for the Cats to win the swimming state championship.