Even with many injuries, Wildcats aim to right ship 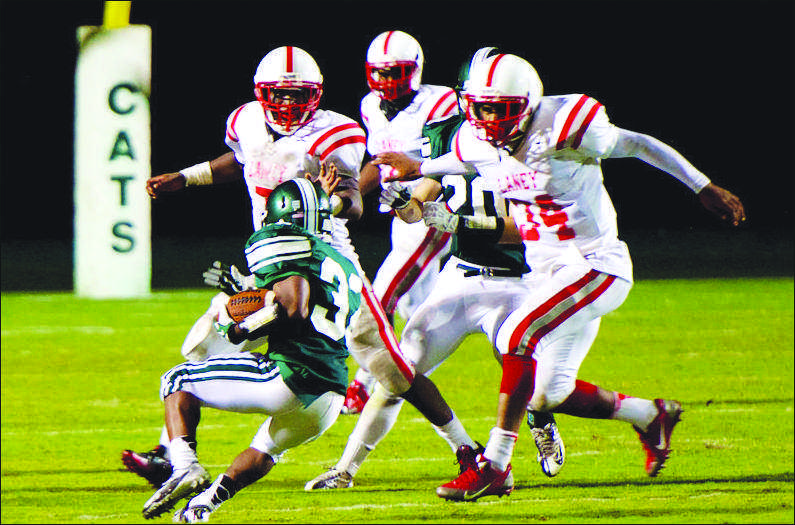 Entering his twentieth year as head varsity football coach, Gerry Romberg may face one his toughest tests at Westminster. Although key players such as Hays Meyer, Harrison Butker, and Nigel Walker have moved on, Romberg returns an experienced group that is hungry to make a playoff run. After finishing last year with a disappointing 5-7 record, it would have appeared that Westminster football had hit a rough spot, yet behind seniors Nelson Douglas and Austin Chapman, as well as juniors Charlie Trense and Cole Haverty, Westminster looks poised for a much improved campaign despite injuries at key positions.

“Well, so far this year, a lot of players from every grade have really stepped up and have been huge contributors to our success,” said senior Austin Chapman. “We have been able to battle through some adversity with all of our injuries but I believe we’ve started to turn a corner.”

Behind all this improvement however, is Coach Romberg. The dedication he has shown throughout his tenure as head football coach has clearly materialized out on the field as the team has shown marked improvement throughout its first few games.  After losing hard-fought games against Blessed Trinity, St. Pius, and Woodward, each week the Wildcats have come back with convincing wins over Laney, Thomasville and Thomson respectively. Even with injuries to starting senior quarterback Jake Forte and senior playmakers Cameron Seward and Sam Schmal, Romberg and the staff have put their players in a position to succeed.

“The whole team has really rallied behind each other,” said junior Davis Houk. “Losing your starting quarterback is never easy but Wooley has stepped in and he’s really played well.”

Going into the season, this year’s team was expected to be very upperclassmen heavy, yet the emergence of freshman Zay Malcome and sophomores Rankin Woley and Nygel Edmonds has given the team an added boost. Since they all have seen significant playing time, the future of the program seems to be in very capable hands.

“We have some new freshmen on the team like Zay Malcome and Chase Williams who have really stepped up and provided the boost off the bench that the team needed,” said senior Austin Chapman.“ With them already becoming a big part of the offense (Zay) and defense (Chase), we’ll need them if our team wants to go far in the playoffs.”

Despite all the success Westminster has had during the regular season in previous seasons, come the playoffs, the team has always seemed to hit a wall in the second round. While Westminster has been a playoff mainstay for many years, it has never been able to get over this hump and contend for the state title.

“It would be great for the football program because we have not been past the second round in a couple years,” said Chapman,“and it would be an incredible experience to be the team that did it.”

With Boston College commits Cam Seward and Sam Schmal getting back to full strength and athletes such as Zay Malcome in the backfield and Rankin Woley under center, they hope to reverse the trend.

“It would honestly be a great accomplishment for the football program as a whole at Westminster,” said junior Cole Haverty. “It would be a great foundation to build on. Hopefully, we’ll be able to contend for the state title in the near future.”

The Wildcats just finished up a much needed bye week in order to heal up, and now they face a perennial AA power and region foe, GAC. Even though the Spartans present a big challenge, the team believes it can compete for the region championship. After bouncing back from tough losses to rivals Blessed Trinity and St. Pius, the Wildcats look to continue the momentum generated by wins over Laney, Thomasville, and most recently Thomson. With an opening region game versus GAC and with Wesleyan and Lovett close in the rearview, the Wildcats looked to avenge last year’s defeats to both the Spartans and Lions in hopes of recapturing the region 6-AA title.

“Unfortunately, last year we didn’t pull off the win, but I think the bye week has really helped ups prepare and get healthy for this big game,” said Seward. “Now, hopefully we can make the adjustments and start region play off right with a win.”

GAC is led by a powerful offense that has put up a ton of points early in the season. A couple weeks ago, they were able to put up an AA season record of 67 points against Howard School (Tenn.). Armed with weapons all across the field, they present a tough matchup for Westminster. Hoping to slow them down are linemen juniors Russ Ude and Quinton Bennett and secondary players seniors Jackson Egan and Jake Johnson.

Overall, this season is full of opportunity for Westminster football. The mixture of senior leadership and young talented underclassmen has this team hoping to accomplish goals that not many teams before them have been able to do, and with the seasoned leadership of Romberg and the rest of his staff, playoff success seems even more plausible. Without a doubt, the team will be able to reach even greater heights   by the end of the season.