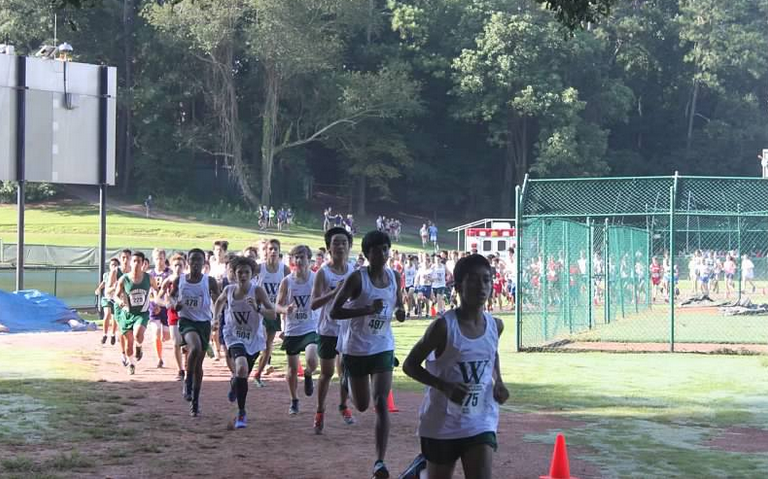 On Saturday Aug. 13, the Westminster Boys Cross Country Team and eight other teams competed in the seventh annual Kosh Klassic. This was the largest year yet, with over 300 athletes taking on the most difficult course in the state of Georgia. The Kosh Klassic is a major invitational that takes place on our own Kosh Trail every year to honor 93-year-old former coach Paul Koshua, who attends the event each year and presents the awards at the end.

The Westminster Boys team won in both the Varsity and JV races. Westminster Varsity beat second place team Bleckley County High School by 13 points with scores of 46 and 59 respectively, and average times of 19:02 and 19:09. Westminster won the JV race, beating Archer by 32 points with a score of 29 and an average time of 21:16. Graham Huff won the varsity race, and Clare Draper finished third as Westminster’s second runner. Andrew Taylor was the winner of the JV race. Westminster Varsity had seven runners in the top 30, and the JV had 7 runners in the top twelve with the top 10 runners in both the Varsity and JV finishing within two minutes of each other.

“I was pleased that we won of course, but I think we could have run better in regards to overall times, but more important than times since it was such an early race and such a hard course, was grouping,” said Varsity Boys Cross Country coach Joe Tribble. “We’re struggling with running as a team, and I don’t think we did that as well as we could’ve, as well as we should’ve. But, that’s why you run these races.” The Westminster team had a lot of gaps, and the goal is for the entire team to run as a group. The team ran fast, especially for such a difficult course, but the key is for the team to run fast side-by-side, and pass other teams as a group.

“I really wasn’t certain we were going to win that race,” said Tribble, “because I know the guy who coaches Archer, and he’s good. And I knew what he had, but they just didn’t perform well. We performed better than they did.” As Westminster moves up to 3A, it is a big step for the team to beat teams like Archer, a 5A classified school.

Freshman runner Raines Draper spoke for all freshmen and new cross-country runners. “The course was a lot harder than I thought, but a lot of us did better than we thought we would, and we beat a lot more older kids than we expected,” said Draper.

The course has the reputation of being the hardest cross-country course in the state of Georgia.

“It’s a little dangerous to win a major invitational first thing, because then, it can (I’m not saying any of us are overconfident, far from it), but it can foster complaisance,” said Tribble. “In other words, even after that victory, I was saying, ‘Guys this is great. I’m glad we won, but we have a long way to go.’”

A large objective of the Kosh Klassic is to honor Paul Koshua, a former Westminster cross-country coach. More important than his being a legendary coach at Westminster, Koshua is a veteran of three wars.  He fought in World War II, Korea, and Vietnam. His awards include the Air medal, two purple hearts, and a silver star. He’s one of the founding members of the Atlanta Track Club and started girls cross country in the state of Georgia, as he was one of the only people at the time who believed girls could run the 5K distance. Koshua has had cancer and heart failure and lived through both of these. When Coach Tribble and Coach Geoffrey Sudderth decided to create this invitational in 2007, their two intentions were to honor Coach Koshua, and to make it so Westminster could host regions. They thought at the time that since Koshua was getting up into his 80’s, this was their last chance to honor him while he is still alive, but now, seven years later, Koshua still brings his humble attitude to every Kosh Klassic and presents the awards.

“He’s not just a legend at Westminster, in fact he’s kind of unappreciated at Westminster,” said Tribble. “We have the Kosh Trail and all this but I mean he’s national, and in some ways international. His starting of the Atlanta Track club, his starting girls cross country in the state, all the work he has done over the years at the Olympic trials, so many Olympic trials. His knowledge.”

All of these things are examples of how Paul Koshua has impacted this community. Koshua believed that it is better to be undertrained than overstrained, and Jeff Galloway, an Olympic runner who ran for Westminster credits Kosh for a lot of his success.

“The only way we can do this is if everyone runs their best,” said Tribble. “It’s not going to happen any other way. People will either pull the team upward or downward. I think it’s going to be upward and I think although we are starting pretty slow, we will begin to pick up steam around Wendy’s. I think that by early to mid-October, this team will be ready. We’ll be a hard team to beat.”

According to Coach Tribble, the team is starting out a little bit slow, and a transformation is not going to happen over night. The team lost a lot of seniors last year, which may be a reason for their slow start. They will have to train harder and smarter than the competition.

“I have to keep things in perspective and be patient,” said Tribble. “It’s very hard for me. I want victory, and I want it now, but it’s a different team than what we had last year, but we have the tools.There is a lot of speed and athleticism on the team, but we have to actualize it. People have to believe.”