Cheerleading: Is it a sport or not? 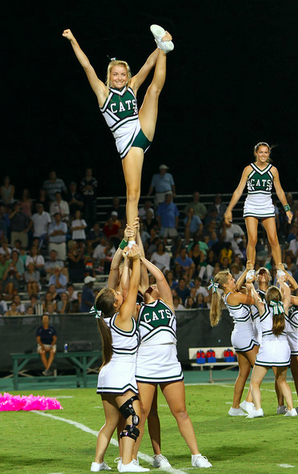 Cheerleading is a source of a heated debate due to the very strong, diverse, and contentious feelings that many people have about the topic. The source of such controversy is but one simple idea: Is cheerleading a sport or not? At Westminster, the cheerleading team is known for their fantastic halftime shows and pep rally performances. The varsity team is made up of 14 members who all work their hardest to support our football team to victory and to show off their routines.

The term sport is very loosely defined, and because of this most people would have trouble coming up with a concrete definition for it. However, it is universally known that a sport must involve physical exertion, skill, and competition of teams or individuals. The point in this definition where many people find fault with the idea of cheerleading as a sport is due to the fact that most school cheerleading does not involve competition against other cheerleading teams. However, it cannot be denied that the girls put in a very high effort level in order to learn and execute their routines.

“For anyone who feels that cheerleading is not a sport, I invite them to come watch one practice,” says coach Angela Shelton. “These girls work so hard from the minute practice starts.  Currently, they are rehearsing two half-time shows simultaneously.  That means they are working on six different dances and four different, complicated stunts.  The girls make stunting look easy on the field, but there are hours of hard work spent perfecting each one.”

The cheerleaders stunts are both thrilling and nerve-wracking to watch, making the performances much more exciting.

“We have a fly, Peyton Ruhmkorff, who is a Stingray, and she can do just about anything we ask her to on the first try, she doesn’t even have to know what she’s doing necessarily,” said varsity captain Mary Coffin. “That’s really fun to just get to do whatever we want with her.”

The Stingrays are a group of cheerleaders who are extremely talented and participate in many competitions around the country, placing in the National Championships at each level. Many agree that this kind of competitive cheerleading can most definitely be constituted as a sport because it involves time, determination, talent, and contests between other cheerleading teams.

The Westminster team’s high ability level is in part due to several experienced seniors and talented underclasswomen, which lets them perform the most difficult of stunts flawlessly. Their impeccable performances are partly due to the great bond formed on the team because of the time spent together practicing and at games.

“I really like the camaraderie of the squad because there are only fourteen of us and we spend a lot of time together, practicing, and then on Fridays it’s a full day affair; we leave school, we go to pregame together, we go to the game together, postgame together,” said Coffin. “You just get to know a lot of girls, older and younger, very well, and I think that’s my favorite part.” 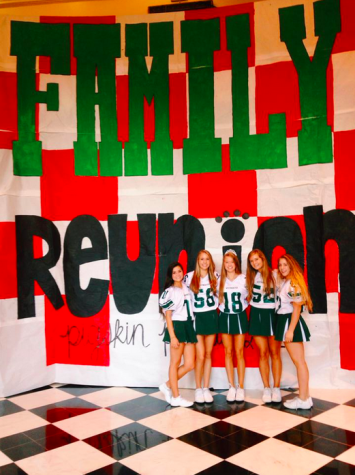 The captains are given a lot of responsibility in the management of the team, helping to organize all of the finite parts of the performances that show the girls’ excellence as a group.

“We make up the dances, choose our stunts, cut the music, and make all the songs meshed together with transitions,” said Coffin. “We balance our budget and decide what the banners are going to look like and order bows and paints.”

While the cheerleaders work very hard to perform their routines and stunts perfectly, many people argue that cheerleading is not a sport not only because they do not believe that being a cheerleader entails having to work hard and be athletic, but also due to the fact that in high school cheerleading, there is little to no rivalry and competition between other squads.

“I’m sure that cheerleading requires some combination of time, mental focus, and physical effort,” said junior Andrew Taylor. “I just don’t believe school cheerleading has a competitive aspect to it.”

Many oppose this idea, especially cheerleaders, who believe that the energy level and work that they put into cheerleading should not go unrecognized due to the fact that many people believe that cheerleading is not a sport.

“Well, I understand why people would think that it is not a sport, but I think that parts of it are very athletic and require some athletic abilities that people don’t understand,” said JV team member Courtney White. “It kind of goes both ways, but I think it’s a sport because I’m a cheerleader and I want credit for it being a sport.”

Many people do not realize how much the cheerleaders have to work everyday to contribute to their team. They have to learn completely new routines very frequently for each football game, and have to have all of their stunts and dances perfected by Thursday afternoon almost every week. They have practices every day for an hour and a half where they focus on both old cheers and learning new routines.

“At a normal practice, we usually stretch for the first five minutes, and then learn a new dance or practice one that we have already done, warm up stunts and learn new ones,” said Coffin. “On Thursdays we put it all together for whatever happens on Friday, so we have to run it however many times until the whole thing works.”

The rewarding feeling of completing a halftime show after a week of practicing makes up for the effort required to pull off the cheerleaders’ exhilarating and difficult stunts. The practices every day are difficult, but none of that matters as the team comes off the field after finishing a seamless dance performance.

“My favorite moment as a coach is when the girls have just finished a half-time routine, and they come running off the field, smiling and cheering,” said Shelton. “They always ask, “Coach Shelton, how was it?”  I am bursting with pride as I tell them, “ You were amazing!””

While the debate rages over the legitimacy of cheerleading as a sport many on the team understand that while other people may look down on their sport, they know that if cheerleading is or is not a true sport does not matter, because the girls time on the squad is both exciting and rewarding. 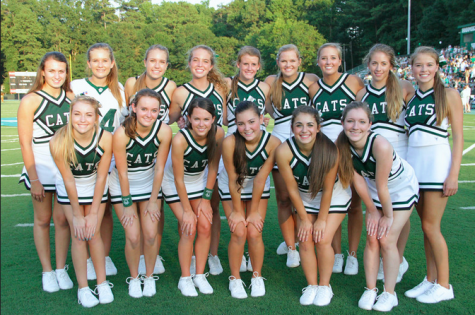