Westminster Victorious over Lovett in Battle of Buckhead 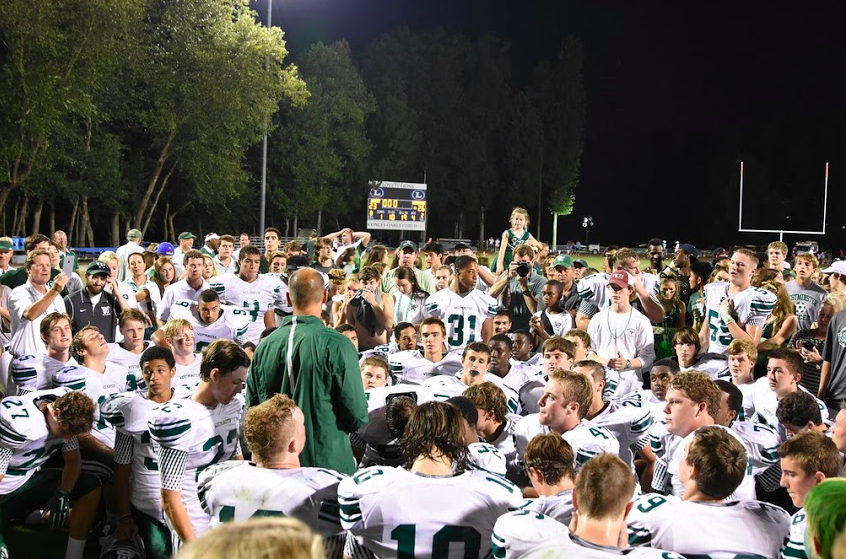 Coach Gerry Romberg talks to the Cats after the game

For the second year in a row, Westminster defeated Lovett in the Battle of Buckhead 26-23. Playing in Lovett’s newly renovated Kilpatrick Stadium, both teams took the field before a packed and boisterous crowd.  Lovett started strong, moving the ball 75 yards in 10 plays with an 8 yard scoring run from quarterback Brady Tindall to put the Lions ahead 7-0. But Westminster’s junior running back, Zay Malcome took a handoff from quarterback Rankin Woley and went 53 yards up the middle of the field to tie the score 7-7. In a decisive moment in the game, Harrison Jones intercepted the ball during Lovett’s second possession and ran down to the 3-yard line, followed by Malcome’s second rushing touchdown to put the Wildcats ahead 14-7. Westminster was then able to convert a second interception into a touchdown to end the first quarter 20-7. During this next series, Westminster intercepted a pass, but was unable to sustain a drive and fourth down ensued. A shovel pass from Harper Keller to Blake Huber resulted in a 27 yard touchdown run giving the Wildcats a lead of 20-7. A later field goal put them up 23-7 before the half.

“Those last couple of plays were major turning points for Westminster during this game,” said head coach Gerry Romberg. “Being able to get those turnovers and those two interceptions was crucial for us”.

Although Westminster was ahead for most of the game, Lovett fought hard to come back.

“Every Westminster Lovett game comes down to the wire,” said Romberg.

Lovett scored in the 4th quarter but was unable to pull ahead of the Wildcats and Westminster defeated Lovett, 26-23. The Cats have now beat Lovett for the second consecutive year and the fifth time in seven seasons.

This game was not only exciting for the football players but also for the Westminster fans that went to cheer on the cats in Lovett’s new stadium.

“I could feel the excitement in the air and smell of fresh face paint,” said junior Alexis Fisher.

Westminster fans and cheerleaders stormed Lovett’s field after the final seconds of the win.

“It was electric in the stands, fans were screaming, cheerleaders were shouting, all eyes were glued to the action on the field.” said junior Charlotte Irvin.

A key factor of the team’s victory is their dedication to attend grueling practices, which started in the summer. The team attended daily workouts in preparation for the game against Lovett, and the coaches worked with players starting in preseason with special attention to the Lovett-Westminster game. Moreover, the thirst for winning the game encouraged the team to train hard each practice.

“Coach Lougas preached, August 28, August 28, until we memorized the date of the game,” said sophomore running back Malcom Strickland. “I would hear seniors yelling ‘you know Lovett is working right now to beat us on that first Friday night.’ This, along with the encouragement of Coach Lougas and Hayes, motivated us to run those wind-sprints, even when we didn’t feel like doing it.” Seniors informed me of [Lovett’s] tendencies, which really helped me, because not only was it my first time playing Lovett’s varsity. It was my first real varsity game ever.”

As Westminster prepares for the rest of the season the Cats work together and move the ball as a “family” to pull off a win.

“Being part of the Westminster football family is just a subset of the Westminster community,” said Romberg. “More importantly we try to build a community that makes everyone feel included. We want to make our members feel like they are part of something bigger than themselves. It’s a team that’s not about the individual it’s about the group as a whole.”

“[Football] Family means everything to me” said Malcome. “It is a band a of brothers that makes the team have a great chemistry. You can count on every player and every coach because we are a family.”

“It’s clear that every member of the football team feels like they are part of something special where the whole is greater than the sum of all the parts,” said Reeder. “Family is so much more than everything we do. It’s coming together as one united unit and one cohesive team. We don’t play football for ourselves. We play for our team.”

The Westminster Varsity Football team moved up a division and were ranked no. 3 in Class AAA going into the season.  They are working hard and are optimistic for the season ahead.

“We do have a lot of talent to work with,” said Reeder.

The team is filled with young talent and could make a deep playoff push this year. The Cats have made the playoffs the past eight years now and are working towards another successful season.

“We are a young team right now trying to find our identity,” said Romberg. “We are still growing and developing. The coaching staff is working hard to mold our players into a team. We are going to get better as a team. We haven’t hit our full potential yet.”