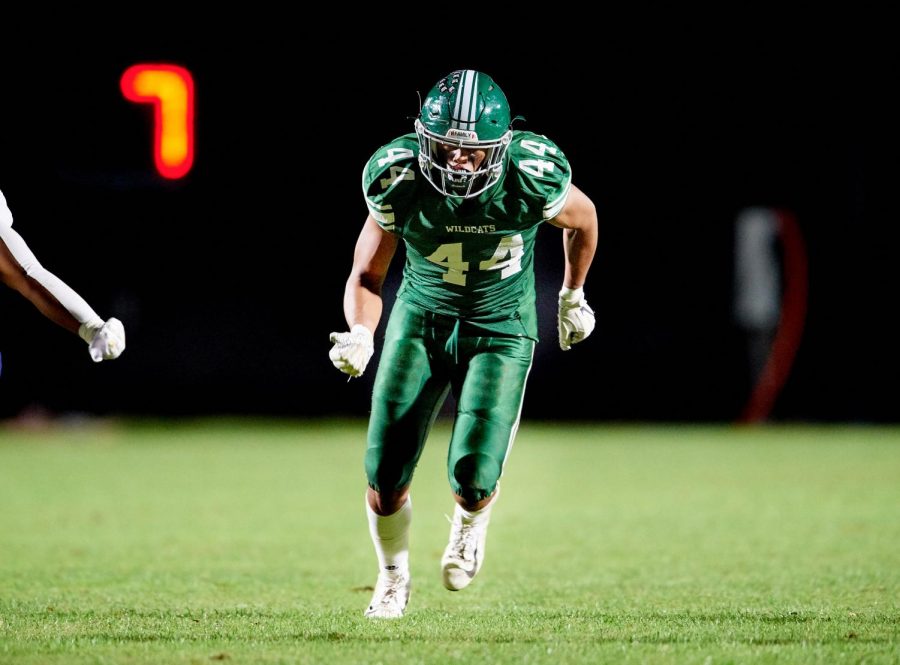 Westminster junior Holden Staes has been a dominant force on the football field for the Wildcats since the get-go. Staes, who will be a four-year letterman for the Wildcats, is an offensive threat with explosive blocking skills and impressive pass-catching capabilities. As Staes heads into his senior year and his final year for the Cats, he will be a critical component for a Westminster state championship run.

247Sports ranks Staes as the 12th-best tight end in the 2022 class and the 25th-best overall recruit in Georgia. However, Staes not only stands out on the field as a talented player but also as a leader of a dominant Wildcat team.

“Holden leads by example, he does the right thing at practice, in the weight room, and on campus,” said varsity football coach Matt Pelot.

Staes pushes himself and his teammates to be better both on and off the field every day. He sets the tone and works hard to show underclassmen what it takes to succeed.

“I work to be a vocal leader and show the underclassmen what it takes to be successful, to buy in,” said Staes.

Just like the countless members of the Westminster football family, Staes began his football career at Westminster in seventh grade playing for Coach Chuck Breithaupt.

“I always wanted to play since a young age. I have always liked the competitiveness of it,” said Staes. “It’s the ultimate team game.”

Staes then went on to play varsity football as a freshman. This is a significant achievement as not only are only the best freshmen are brought up to varsity but Staes was able to make an immediate impact. A double threat, Holden was a playmaker on both sides of the ball playing both offense and defense. Standing at an impressive 6”4’ and 220 pounds, Staes makes game-changing plays through his powerful blocks and impressive catches.

“On the offensive side of the ball, he is a big part of what we do, and we want to continue to put him in positions where he can be a threat,” said Pelot. “He can make catches that a lot of high school kids can’t.”

Staes’s high level of play at such a young age sparked his recruitment journey during the summer going into sophomore year. Staes attended football camps at powerhouse universities such as Georgia, Notre Dame, and Michigan, among others.

“I went to six or seven camps over the summer….It was to get my name out, to the schools I was interested in, and to get in front of the coaches,” said Staes.

After his sophomore season, Staes used his game film to help create highlight reels of himself in order to gain the attention of scouts and coaches. Using Twitter as a platform, Staes got his name out by tagging coaches and recruiters on his highlight reels.

“The first offer I got was from Michigan, and once I got that offer, my name got out there more,” said Staes

Getting noticed is no easy task, even for a high-level prospect like Staes. In order for himself to be noticed by coaches, Staes had to stay persistent; sending his film to coaches and commenting on their posts helped his recruitment tremendously.

“The biggest thing for me when I had no offers was being diligent. I would just send my film to every coach that followed me back on Twitter, every post they put out I would drop my film in their comment section,” said Staes.

Staes’s hard work and perseverance paid off, receiving multiple offers from many of the best programs in the nation such as Michigan, Auburn, and Alabama. When deciding what school to commit to, Staes felt that Penn State was the right choice for his position and skill set, committing to play for Coach James Franklin during the summer before his junior year.

“At the time, they were a top-ten program in the nation. I had built the best relationship with the coaching staff up to that point. The way they were using the tight end position was intriguing to me,” said Staes.

However, six months after his commitment, a tough year for the Nittany Lions and multiple coaching staff changes ultimately led to Staes’s decision to de-commit.

“The biggest reason was they brought in a new offensive coordinator,” said Staes. “He really wasn’t featuring tight ends in his offense, or at least the way I wanted to be used in college.”

As a heavily recruited athlete with a bright future ahead, Staes has some words of wisdom for any fellow Wildcats who are just beginning their recruitment journey.

“Just get your name out there to the coaches. Go to as many camps as you can,” said Staes.

In addition, Staes emphasized hard work and knowing what you can control are also major contributing factors to getting recruited.

“Control what you can control….You can’t control if a coach gives you an offer. However, you can control how hard you play on the field and the work you put in during the off-season.”

As Staes heads into his senior year and his fourth and final year on varsity, he will once again be a critical component for the Wildcats.

“His leadership next year, along with a lot of the other seniors, will determine our success,” said Pelot.

This is undoubtedly true, and the Wildcats look forward to catching Holden Staes back in action next fall. Further, the Westminster faithful eagerly anticipate his commitment to play at the next level and the opportunity to one day watch Staes represent the Cats at a big-time D1 program.